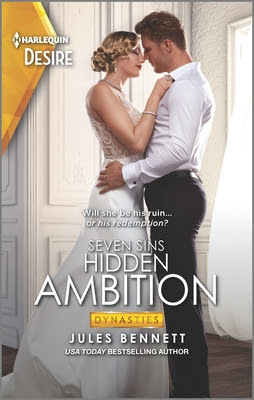 Will she be his ruin… or his redemption?

Revenge has never been hotter—until desire burns away their deceptions…

Chase Hargrove is on a mission to take down the company that destroyed his family…by becoming its CEO. Loyal Black Crescent employee Haley Shaw is his unwitting secret weapon. But when Chase is blindsided by passion for her, he gets careless. With his hidden motives exposed, will he lose everything—even Haley? Or will the tables turn when he learns she has hidden motives of her own…?

Jules Bennett’s Hidden Ambition is the fourth book in the Dynasties: Seven Sins series. The books in the series are loosely connected so this can easily be a standalone read.

Fifteen years ago, Vernon Lowell stole millions from his family and clients at Black Crescent Hedge Fund. He disappeared and left destruction and devastation in his wake. The sons and daughters of those he stole from have had to deal with not only their pain and loss but that of their parents as well. Chase Hargrove is one of those people. Chase had to watch his father go to prison for what Vernon did while his mother suffered a nervous breakdown. Over the years, Chase has worked hard and has bided his time, waiting to get revenge for the wrongs done to his family. With Joshua Lowell stepping down as CEO of Black Crescent, the company is looking for his replacement. The time has finally arrived for Chase to get his revenge by destroying Black Crescent from within. All he has to do is become the new CEO of the company. Chase thinks flirting and getting friendly with Josh’s assistant Haley will help.

Haley Shaw is one of Black Crescent’s most loyal, dedicated, and valuable employees. She stuck around during and after the Vernon scandal and has worked her way up to being Joshua’s right-hand woman. Haley is often overlooked as being just a secretary, but she’s so much more. Haley is not only dedicated to Black Crescent, but she’s also dedicated to her charity which helps kids like her who can’t afford to go to college go. The two jobs take up all of her time and leave little for a social life.

Haley finds the attention given to her by Chase to be a fun distraction. She knows she shouldn’t get involved with a candidate she has a decision in hiring and definitely not one who could become her boss. However, the attraction between her and Chase is too strong to ignore. Haley senses there’s more to Chase than meets the eye and her loyalty lies with Joshua and Black Crescent. To test her theory, she sets a trap for Chase that could destroy one or both of them forever.

Hidden Ambition was a book I didn’t want to like. I mean I’ve read the other books in the series and Chase has appeared in all of them. I didn’t want to like him. I thought he was a little too smooth and sure of himself. Oh, he’s definitely smooth and sure of himself, but this man just had me relaxing and losing myself to this story. I also wasn’t sure where Haley stood. I mean there’s something to be said about not always reading the blurb of a book. I had no idea what to expect. I loved the banter between these two. They’re playful and passionate. In a lot of ways, their pasts are similar.

One of my biggest complaints about this series is that it’s not tightly interconnected as much as I would have liked it to be. The mystery arc of the series has something to do with Joshua Lowell fathering a child he knows nothing about. When I first read Naima Simone’s Ruthless Pride, I wasn’t too happy that the mystery wasn’t cemented. Meaning, there wasn’t anything driving me to HAVE to read the next book, other than my love for the next author’s writing. I’m finding now that I just really don’t care about that mystery. The Seven Sins series is really and truly not about Josh fathering an unknown child, but about the heirs of the people his father stole from. However, more information regarding the child mystery has come to light.

I’m hoping to see more of Haley and Chase in the upcoming books of this series.

USA TODAY bestselling author Jules Bennett lives in the Midwest with her two girls and her high school sweetheart husband. She published her first book in 2005 and hasn’t stopped creating unique, fascinating characters since. She often takes her plots from songs or dreams.

Jules is the author of contemporary romance from small town to billionaires. While she is good friends with other romance authors, she still fan-girls at signings.