Review ~ SEASON OF THE WOLF by Maria Vale 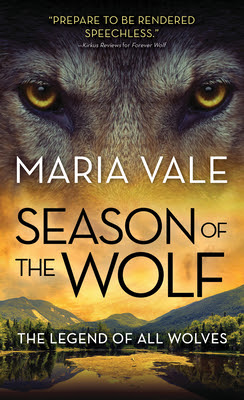 In a world of danger and uncertainty, the Alpha has enough to worry about without him...

For Alpha Evie Kitwanasdottir, things are never easy. The Great North Pack has just survived a deadly attack. Evie is determined to do whatever is necessary to keep her Pack safe, especially from the four Shifters who are their prisoners.

Constantine lost his parents and his humanity on the same devastating day. He has been a thoughtless killer ever since. When Constantine is moved to live under Evie's watchful eye, he discovers that taking directions and having a purpose are not the same thing.

Each moment spent together brings new revelations to Constantine, who begins to understand the loneliness of being Alpha. He finds strength and direction in helping Evie, but there is no room for a small love in the Pack, so Constantine must work harder than ever to prove to Evie he is capable of a love big enough for the Great North Pack itself.

Season of the Wolf is the fourth book in Marie Vale’s The Legend of all Wolves series. I have read all of the previous books and highly recommend that you read them all in order if you really want to get the full scope of what it means to be part of this Pack. The level and intensity, emotion, and sense of family that these books represent are not like anything that I have ever read in other books paranormal or otherwise. Every book focuses on a couple where one of them is a member of the Great North Pack. If I have to explain to you what that is, then you understand why you have to read the series in its entirety to appreciate every little detail.

In this installment, we learn more than I thought we would ever learn about “The Alpha” previously known as Evie Kitwanasdottir. She is the leader of The Great North Pack and never does anything for herself. Her sole purpose is to protect The Pack even if she is lonely and tired. After The Pack comes under attack, she ends up bringing four shifters into the fold who in some way or the other played a role in the attack. In order to keep a watchful eye on all of them, she separates them among her most trusted Pack Leaders. Evie decides to keep the most dangerous one, Constantine under her command. What she doesn’t know is that Constantine is much less of a threat to her Pack and more of a threat to her heart. As Constantine observes the way Evie is pulled in all directions by The Pack, he realizes how much she sacrifices and how little she gets to be her own person. His admiration for her turns into something that he doesn’t expect. More importantly, as she lets down her walls, Evie notices what she has been missing.

I found Season of the Wolf to be a very authentic love story. In fact, I felt like it was much more personal and romantic than the other three books because the threat was much more in the background than other books. I really got to understand the complexity of Evie’s sacrifice as well as Constantine’s lack of a purpose. Evie and Constantine were two sides of a coin that were meant to be together. I’m not quite sure how Marie Vale will be able to top this one but I’m definitely looking forward to seeing her try.