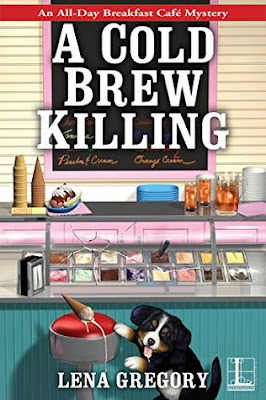 When an ice cream vendor discovers a frozen stiff, Florida diner owner Gia Morelli has to serve up some just desserts...

Gia has become good friends with Trevor, a fun, flirtatious bachelor who owns the ice cream parlor down the street from her popular All-Day Breakfast Café. Trevor has the scoop on all sorts of local attractions and activities. But when he bursts into her diner, trembling and paler than a pint of French Vanilla, she can tell something's very wrong. Trevor points her toward his shop then passes out cold. When Gia runs down to his shop, she discovers a chilling sight—a dead body in the open freezer. But the ice cream man's troubles are just beginning. The police suspect him of this murder a la mode, especially when details of his questionable past surface. Gia believes in her friend and is determined to clear his name and find the real cold-blooded killer before someone else gets put on ice...

It’s election time in Boggy Creek, Florida and residents are all abuzz about the upcoming mayoral race. Former friends Mitch Anderson and Ron Parker are both in the running. Both seem a little too slick and their smiles are a little too practiced and fake. After only arriving in town six months ago and opening the All-Day Breakfast Cafe, Gia Morelli is curious about what her new friends and residents think about the candidates.

The race takes an interesting and tragic turn when Gia’s new friend, Trevor Barnes runs into the cafe after discovering Ron dead in the freezer of Storm Scoopers, the ice cream parlor owned by Trevor. When Trevor refuses to cooperate and answer questions asked by Gia’s boyfriend, Detective Hunter Quinn, Trevor is arrested for Ron’s murder. While Trevor is definitely acting strange and not like himself, Gia knows there’s no way Trevor would kill anyone. Gia makes it her mission to prove Trevor is innocent. If she also just so happens to find the real killer in the process, all the better.

Lena Gregory has written a mystery all about secrets and those secrets coming to light. She’s introduced several new characters who are all connected by the past. Through the course of Gia’s search to clear Trevor, she discovers new things about people she considers to be her friends, and along the way, some questions about characters readers have grown to love are answered. Lena definitely has you guessing as to what is happening and who the killer is up until the very end of the book. I only wished that she would have used more descriptions for some of the characters, as I had a hard time remembering who some people were and how they were all linked to each other. Now that I have some questions answered, I’m looking forward to the next book in the series.

~ Favorite Quotes ~
“The things you appreciate most in life are those you have to wait for.”

“Family doesn’t have to be related by blood.”

“Sometimes friends aren’t what they seem.”

Lena Gregory is the author of the Bay Island Psychic Mysteries, which take place on a small island between the north and south forks of Long Island, New York, and the All-Day Breakfast Café Mysteries, which are set on the outskirts of Florida’s Ocala National Forest.

Lena grew up in a small town on the south shore of eastern Long Island. She recently relocated to Clermont, Florida with her husband, three kids, son-in-law, and four dogs. Her hobbies include spending time with family, reading, jigsaw puzzles, and walking. Her love for writing developed when her youngest son was born and didn’t sleep through the night. She works full time as a writer and a freelance editor and is a member of Sisters in Crime.