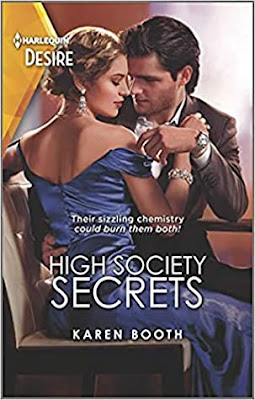 Their sizzling chemistry
could burn them both!

What clashes in the boardroom
combusts in the bedroom!

Working at her late ex-husband’s company, socialite Astrid Sterling finds new purpose. If only star architect Clay Morgan would give her a chance instead of the cold shoulder. But a truce that explodes into blinding passion leaves Astrid breathless—and torn. The single dad already has trust issues—and Astrid has a secret that could shatter everything they’ve built…

Have you ever had a book sneak up on you? I started reading Karen Booth’s The Sterling Wives series because the third book captured my attention. I’m a serial series reader, so I have to read the books in order. Plus, Karen’s one of my favorite authors. I wasn’t expecting to fall in love with the characters of High Society Secrets so much. This was truly a story that snuck up on me.

The Sterling Wives series is about three women who are connected to each other because they were at some point married to the same man. Upon his death, Johnathon Sterling’s will revealed that he had left 51% of Sterling Enterprises to the women equally. High Society Secrets in my opinion is a standalone read. However, in the first book, Once Forbidden, Twice Tempted, Sterling Enterprises started the process of competing to be selected as the real estate firm to develop a property for the city of San Diego. High Society Secrets picks up shortly after Once Forbidden, Twice Tempted ends.

Readers were introduced to Astrid Sterling and Clay Morgan in Once Forbidden, Twice Tempted. In High Society Secrets these two shine. Off the bat, Astrid and Clay have a complicated relationship. Astrid is part owner of Sterling, the company Clay works for. Astrid is also the ex-wife of Clay’s sister Miranda’s deceased husband. After being married to Johnathon, Astrid knows she wants real, long-lasting love. Clay is a single father who refuses to risk his heart and that of his five-year-old daughter after his ex-wife left them. As the project manager and architect for the Seaport project, Astrid and Clay respectfully are thrust together. Undeniable passion ensues, but the past is waiting to derail these two.

As a former supermodel, Astrid is often overlooked. But she’s smart, compassionate, thoughtful, and caring. Clay is a man who just wants to do the best job he can at work and then spend as much time as possible with his daughter. He comes across as shy and a little grumpy. The two have an immediate attraction to each other. I loved watching them interact and ultimately admit how they truly feel for each other.

Karen has set this series up as a mini soap opera. From the connection the women share, to the Seaport Promenade proposal, to the men the Sterling wives fall in love with, things are complicated. High Society Secrets drops a bombshell that will make the next book, All He Wants for Christmas a must read. Miranda is set to start a taboo relationship with her brother-in-law and I’m expecting questions regarding what’s truly happening with the Seaport proposal be revealed. I have a feeling things at Sterling Enterprises are about to reach a fever pitch and alliances are going to be questioned.