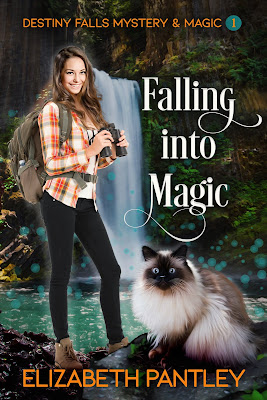 Falling into Magic is a full-length magical cozy mystery novel with a touch of humor and a hint of romance. It is the first book in the Destiny Falls Mystery & Magic series.

When Hayden was a child, she lost her cat. Adults told her the cat had escaped the house and ran away, but she knew the truth. The mirror had taken her. She knew because the mirror had given her a glimpse of an alternate world and had nearly pulled her in, so she was certain the cat had suffered that fate.

Twenty years later Hayden discovers the true secret of the mirror when she is thrust into it by a mysterious villain. She learns of a world she never knew existed, and a family she never knew she had. But danger brought her here, and it followed her. And now, Hayden is on a mission to see that the threat is removed, so that she can begin her magical, meaningful new life in this enchanted world.

Why Mystery Writers Make Bad Party Guests
What kind of party guest are you? Are you an outgoing, chatterbox, fun-having, party-goer? Do you thrive on meeting lots of new people? Or would you rather fade away in a corner, sip a glass of wine, and hope that no one approaches you to say hello?

Some people can chat and schmooze with just about anyone and they love to stay at the party until the band plays the last song. Others gravitate towards the only two people they know, or search out a quiet corner to hide in. They leave the premises the minute that dinner is over.

Mystery writers have a third style, and that’s where I fit in. We love parties because the people watching is ripe with excellent fodder for characters and scenes. Why is that door in the hallway locked? Is it the staircase down to the laboratory? Why is that man staring at my neighbor’s wife? Are they having an affair or is she an old girlfriend that he’s plotting to kill? Where did they get that antique collection of vases? Is one of them actually a cremation urn? What’s up with that bookshelf filled with old books about treasure? And I saw shovels and tarps in the garage. Is there treasure here? Or are the shovels to kill the old girlfriend? I heard a noise upstairs, and that suspicious woman is missing. Better excuse myself from the table and go “use the bathroom” . . .

Not only are the guests and location a great source of inspiration, virtually the entire event provides story ideas. Yes, parties are filled with interesting characters and possible plot lines. Wait… My dessert looks tampered with. Why is there an odd gap in the frosting?

I woke up in a cold sweat. I bolted upright, my heart pounding, fear in my bones. Today was The Picnic. I was to meet The Family. I knew better than to hope for a relaxed BBQ. I had the feeling this would be more like giving a speech in front of an auditorium filled with people. Oh God, would I have to give a speech? The picnic was in my honor, and I wouldn’t put it past them to expect that and not tell me. Thank goodness I had help selecting an outfit for today. I would have gone with white capris, a tank top and sneakers, but my fashion guides directed me to a pretty floral sundress and strappy wedge sandals. No to the ponytail, yes to loose waves. But first, a jog and then a bath. I had plenty of time since the picnic started at noon, and I had very quickly fallen in love with that large soaking tub.

The morning passed by much too quickly, and soon it was time. As I went downstairs the solemn pace of a funeral march drifted through my imagination. I laughed at myself and shook it off.

I expected to find my new friend in the kitchen with a cup of tea for me, as seemed to be his way, but instead there was a team of caterers bustling about and preparing trays of food. Of course. Why would I think we’d be grilling hot dogs?

The day was pleasantly warm and sunny. I looked around the yard and noticed that everyone was here, the same group as the picnic.

Jade, as usual, was standing alone near the house talking on her phone. No wait. She wasn’t on her phone. She was talking to someone standing just inside the house. She looked angry, which was a difficult thing to pull off, since she always looked angry. Then she appeared to calm down, and she began nodding enthusiastically. Very out of character. I leaned back in my chair and craned my neck to see who she was talking to and knocked my napkin on the ground.

I bent down to pick up my napkin and leaned over to see who Jade was talking to. Just then I saw someone burst out of the house at that very spot, briskly walking past Jade, who then walked into the house. Was it the two of them who’d been talking? It appeared so, but it may have been a coincidence.

I excused myself to use the restroom and went into the house. As I walked past the kitchen, I saw Jade inside. All the salads were set up on trays, ready to be brought outside. And she was plucking the cherry tomatoes off a bunch of the plates and eating them! I giggled quietly. You never know what people do when no one is watching.

Elizabeth Pantley is the international bestselling author of The No-Cry Sleep Solution and twelve other books for parents. Her books have been published in over twenty languages. She lives near Seattle and is the mother of four and nana to one. This is her first work of fiction.