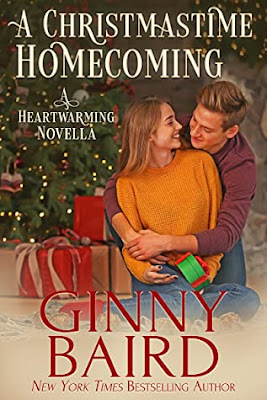 When love is a journey, let your heart be your guide.

Ten years ago, Connor Holt left Christmastime Farm to join the navy and see the world, and he’s rarely returned. When his dad has a minor accident, Connor comes home to help run the family’s Christmas tree business, before heading to Washington, DC to pursue his new job as an airline pilot. Being in small-town North Carolina reminds him of the simple pleasures he’s left behind, like the look of fresh-fallen snow on the fields and the pine-scented mountain air. Connor’s noticed something else that’s extra special about Hollybrook Falls... The pretty sparkle in Kylie Chisholm’s warm brown eyes. Even though he’s made plans elsewhere, could the pine-scented mountain air be urging him to stay?

Kylie Chisholm is having trouble getting her fledgling donut shop effort off the ground, but she’s not about to tell accomplished Connor Holt about that, much less let him in on her more embarrassing secret. She madly crushed on him as a teen and, a whole decade later, her feelings for him haven’t changed. Now, the all-grown-up Connor seems interested in her, which only makes conflicted Kylie fear heartbreak. While she’s firmly rooted in Hollybrook Falls, Connor’s not planning to stay. During the season of miracles and second chances, can they find their way to a happy ending?

Ten years ago, Connor Holt left small-town Hollybrook Falls, North Carolina, and his family’s Christmas tree farm behind to join the Navy. At the time, he had no idea he was also leaving his neighbor Kylie Chisholm and her secret crush on him behind. With his time in the Navy over, Connor returns to Hollybrook Falls to help out his family before he begins the next chapter in his life. He runs into Kylie on his way back into town and sparks fly.

A Christmastime Homecoming is a sweet romance but the sweetness isn’t overdone. In typical Ginny style, she gives good descriptions that allow you to visualize the scenes. This can a bad thing because you’re going to want donuts. Reading this story made me feel as though my heart was sighing. It was just what I needed to invoke the feeling of Christmas.

New York Times and USA Today bestselling author Ginny Baird writes sweet contemporary romance with a dash of humor and a whole lot of heart. She's published more than twenty-five novels and novellas, both with traditional presses and independently, and has several exciting projects in the works. When she’s not writing, Ginny enjoys cooking, walking, and spending time with her family.