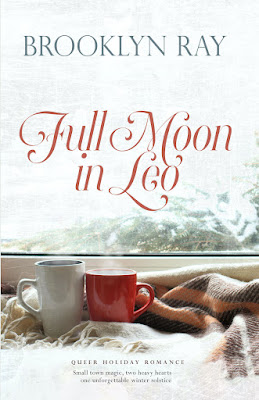 Cole Morrison left Jewel’s snow-covered fir trees ten years ago. But after a disastrous family Thanksgiving, Jewel seems like the only place left to go. When a run-in with a gorgeous stranger leaves him with debt to pay, Cole’s escape from his past turns out to be much more than a lonely Christmas vacation.

Jesse Carroway, the local Jewel witch, has been running his family’s successful, small-town Apothecary ever since his grandmother passed away. When Cole stumbles into his shop and accidentally wrecks a good portion of his inventory, Jesse does the only thing he can possibly think of—offers Cole a job and himself some help for the upcoming holiday rush.

Cole’s clumsy with candles and doesn’t trust easily, but soon Jesse gets a peek at the guy behind his bad-boy reputation. As the nights lengthen toward Yule, Jesse wonders if magic is to blame or if Cole might’ve fallen into his life for a reason…

Hi Brooklyn. Welcome to Read Your Writes Book Reviews. How are you?
I’m great! Thank you for having me.

Congratulations on the release of Full Moon in Leo. What can you tell me about the story?
FULL MOON IN LEO is a small-town romance between an ex-convict who escapes his judgemental family and flees to his aunt’s cabin in Jewel, California, and the sweet, nonbinary witch he meets there. It’s full of heart and hope, found family and witchcraft. It also features a fully Queer cast with a nonbinary main character and a pansexual main character, and a sapphic side ship. It's got the gooey, tender Christmas feelings of a typical Hallmark romance, but it's all about Yule, pagan rituals, and it's quite a bit sexier than a Hallmark, I have to say.

Tell me about the title. Does it have a special meaning?
There is a chapter in the book where Jesse, the witch, explains what a full moon in Leo means for people—specifically witches. But basically, it’s a play on astrology, horoscope-matches, and a nod at the witchy vibes in the book.

Can you please tell me about Cole Morrison and Jesse Carroway?
They’re both looking for something, whether that be family, new beginnings or love, and they both find it in each other. Even though they’re very different people, Cole and Jesse find the best in each other.

What is it that makes these two perfect for each other?
Well, you’ll just have to read the book! But I think their individual personalities and desires have something to do with it.

Are there any fun facts about Full Moon in Leo? If so, can you please share some?

What’s your favorite part of a romance book to write and why?
I’ve a very big fan of the first kiss, and I think the first kiss in FULL MOON IN LEO is one of my favorites that I’ve ever written. The tension, connection and beginning of a romance never fails to delight.

Can you tell me about one of your favorite scenes in the book and why do you count it as a favorite?
Besides the first kiss, there’s a scene that takes place on a fire-escape where Jesse and Cole are talking, connecting and being vulnerable with each other. It’s quiet and sweet, and gives the reader a peek at both the heroes qualities and interests.

Did you find any scene or scenes, in particular, to be hard to write? If so, can you tell me about it/them?
The hardest scene for me to write was probably the scenes involving Cole’s family at the very end. No spoilers, but it was emotionally draining while also being quite a bit relieving. Giving him a happy ending had always been the plan, but it was a lot of work to get there.

Thank you so much Brooklyn for answering questions for me.

Brooklyn Ray (they/them) is an award-winning author of Queer Paranormal Romance and Erotica. They’re a fan of fresh brewed tea, long walks through the woods, and evenings spent reading sexy books. They write about witches, necromancers, and other magical creatures, and moonlight as a tarot and palm reader in the Pacific Northwest.