Review ~ SNOWED IN WITH THE FIREFIGHTER by Victoria James 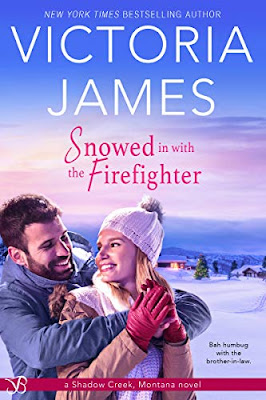 Bah humbug with the brother-in-law.

Dr. Melody Mayberry’s life just took a turn that’s left her questioning everything. Where better to hide out than the remote family cabin in the mountains? The last thing she expects to find there is her swoon-worthy brother-in-law, the one man who may have more baggage than her.

Finn Matthews is not ready to face the fact that the recent injury he sustained in a fire may have ended his firefighting career. He’s not interested in sharing the cabin with anyone, let alone Melody, and their family just texted with yet another unwelcome surprise—they’ll be there Christmas Eve.

To keep their meddling family at bay, the two team up to fake a little holiday cheer. But between ridiculously competitive Monopoly games, marathon Christmas decorating, and a storm that strands them together with nothing but a fire and a warm couch, they realize something major—their fake holiday cheer isn’t feeling so fake anymore, and that’s something neither of these two Grinches expected...

It’s been two years since Victoria James has invited readers back to Shadow Creek, Montana. Snowed in with the Firefighter is the seventh book in the Shadow Creek, Montana series. However, the series was rebooted with the fifth book, The Firefighter’s Pretend Fiancée. I like to call this reboot/spin-off the Mayberry Sisters. It's not necessary to read all the books in the series. If you just start off with The Firefighter’s Pretend Fiancée, you will be fine and have the opportunity to meet all the Mayberry sisters and learn about their background.

Melody Mayberry is a character I really don't remember very much. Outside of her being the sister of the last two heroines and an OB/GYN, I don't remember her at all. Finn Matthews on the other hand has had my heart since The Firefighter’s Pretend Fiancée. My heart broke when at the end of the story he was injured and his fate was left in question.

It's been a little over a year since Finn’s accident. The last few months have found him isolating himself at his brother and sister-in-law's remote cabin, much to his family's displeasure. After being forced to take a vacation from the hospital where she works, Melody finds herself at Molly and Ben's cabin, not knowing that Finn is there as well. Can you say family set up? Melody and Finn end up spending several days together, where they get to know each other better and make decisions about their own lives.

Melody isn't one of my favorite characters. I had a really hard time relating to her and liking her. However, at the same time, it's difficult to judge someone when you haven't walked in their shoes. Melody is a product of her parents. Her father failed to protect her and her sisters from the verbal and mental abuse of their mother, who is just plain evil. Melody has spent her whole life being jealous and envious of her older sister Molly. When she let her walls down and opened up to Finn, I was able to get to know her and like her just a little. There were times when she and Finn were good together. He made her loosen up and embrace happiness that she never truly allowed herself to have. At the same time, I'm disappointed that the issue with the mother wasn’t fully addressed. Let's be honest, Melody and her sisters really need to sever all ties with their mother for their mental and emotional well being.

Snowed in with the Firefighter is a slow burn, sweet romance. The book needs a trigger warning. Melody is an OB/GYN, and not every case she sees is perfect or has a happy ending.

~ Favorite Quote ~
“It’s okay to not be a superstar every day.”

“Everyone makes mistakes. It’s okay to not be okay.”