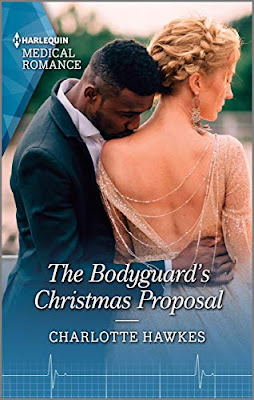 Nurse Kat Steel always wanted a big family, but a childhood accident and her ex’s departure ended that dream—she’s not about to lay her heart on the line again. Until Logan Connors—ex-bodyguard and new trauma surgeon—and his adorable son arrive! Logan’s complicated past means he’s not looking for happily-ever-after, either. Could a little mistletoe magic change that for them all?

Oh my gosh. The Bodyguard’s Christmas Proposal by Charlotte Hawkes owns my heart. Be prepared, you might need a tissue or two. This is the third book in the Royal Christmas at Seattle General series. It is a standalone read that references couples from the other stories. At certain times, the books all overlap, but nothing is revealed.

The Bodyguard’s Christmas Proposal is the story of ER Nurse Kat Steel and former Army medic and royal bodyguard Logan Connors. After a car accident, the royal family of Isola Verde is rushed to Seattle General with Logan performing a medical procedure in an attempt to keep the king alive. This earns Logan the nickname of Comic Book God by the nurses in the ER. As Kat is tending to Logan’s injuries, the two form a connection. Kat is surprised to discover Logan will soon be the new trauma surgeon. Fate keeps bringing these two together with the help of Logan’s four-year-old son, Jamie, and his favorite dinosaur toy.

When I started reading this series, I pretty much overlooked this story. After reading the first two books, I was so focused on the last book, The Princess’s Christmas Baby. I also didn't really get a sense of Kat or Logan in the previous books. But they captured my heart and I loved them. I loved that they are both looking for something in their lives, without really knowing it. I loved that Jamie was such a big part of the story. Charlotte gave him page time with both his father and Kat individually and as a family unit. He literally stole all the scenes he appeared in. Another thing I loved was that I didn’t think the story was predictable. This revelation was both surprising and sad at the same time.

From the cover, I thought this was going to be an interracial romance. I don’t believe it is. If it is in fact an interracial romance, the character descriptions didn’t truly convey so. I read The Bodyguard’s Christmas Proposal from an ARC, provided by the publisher. It seems as though the first part of the story was written in US English, and the second half in UK English. I don't know if this is the case in the final version or not. I do know that I want to read more from Charlotte.