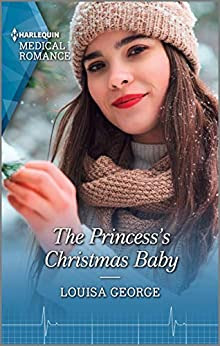 A pregnant princess…
…and her knight in shining scrubs?

When a forbidden and oh so passionate weekend together leads to a very unexpected consequence, Dr. Lucas Beaufort and Princess Gigi Baresi find their lives turned upside down. So when a car crash leaves Gigi’s father—the king!—with his life hanging in the balance, she’ll have to decide: duty to the crown, or claim the family, and love, she’s always wanted…

The Princess’s Christmas Baby by Louisa George is the fourth and final book in the Royal Christmas at Seattle General series. The story features Princess Giada Baresi of Isola Verde and Dr. Lucas Beaufort. This is a best friend/sibling and surprise baby romance. While this is the fourth book, I think it can be read independently of the other books.

Giada is the younger sister of Dom di Rossi, the hero from the first book, Falling for the Secret Prince. Lucas is Dom’s best friend and the only person who knows Dom’s true identity. While Giada and Lucas have known each other for years, they never spent alone time together until Dom asked Lucas to entertain Giada, due to a conflict in his schedule. It is at this time the stage for the story is set. The minute Giada walks into Lucas’s home, there is a sizzling attraction between the two. Lucas knows there can never be anything between them because her brother is his best friend. Giada, for her part, pushes that aside and pushes Lucas to act on their mutual attraction. For me, this is where the story and I started to have a disconnect. I’m not a fan of one party saying no or that something can’t happen and the other party choosing to disregard the no and continue to push. This made me dislike Giada, and that dislike continued throughout the story.

Lucas and Giada are opposites in every way. But because of this, they complement each other. Lucas is ten years older than Giada and is a serious all work and no play type of guy. He is a man unto himself, as he doesn’t have a relationship with his family, of their own choosing. Giada has been known as the Party Princess and is oftentimes viewed as reckless. This image is one she is desperately trying to change. While she has her father and brother in her life, they aren’t truly all that close. Giada is loyal and believes in her country, the crown, and family.

No, The Princess’s Christmas Baby wasn’t my favorite book of the series. However, it was an enjoyable read. The ending was good. I can’t really say I truly saw how everything would unfold. I liked and appreciated that aspect. This story ended the series on a good note.