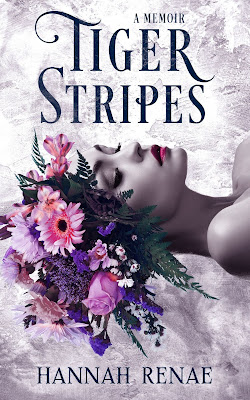 And a suicide attempt...

Hannah was told she would not make it to 25 with the way she was living. She had struggled with mental illness her entire life, but at 22 her demons came to a head at the grips of severe substance abuse, life-changing trauma, and two major deaths in her life.

Hannah's struggles land her places no one ever hopes to grace; jail and psych wards lead her to the brink of death. Running out of options she's left with two choices: live or die. This heart-wrenching memoir combines recovery with bittersweet romance told in a raw presentation that immerses the reader into the author's dark state-of-mind in every page.

Tiger Stripes is going to add a valuable voice to the conversation about women's mental health issues.

I am screaming at the top of my lungs and can feel my throat tearing, becoming raw. I don’t know how many times I have said his name now, but it is all I know how to do because nothing is making any sense.

I am in a locked room and flashes of images are going through my head, but there is only one thing, one thought that I can focus on, that is pounding through my brain throughout this confusion and that is pouring out of my lungs to the point that my chest feels like it is going to rip.

I beat at the metal door that barricades me from something unknown and choke on words that begin with H.

I repeat these words for what feels like a lifetime, until I forget how to speak and my begging turns to carnal screaming—shrieking.

No one comes. No one answers. I wait for footsteps, for the sound of the door unlocking, but all I can hear is the sound of my frantic breaths and the echoes of a lamentation that is anything but human.

I look down at my body. My feet are bare against the concrete floor; I cannot feel them. The jean shorts I am wearing show off my slender, scratched legs and remind me that I am small and feeble at this moment, but in an act of desperation, I put all of my faith in the power of momentum and I run. I fucking run as fast as I can from the three paces it takes to get from the wall to the ominous looming, locked door and attack it with my entire being, letting out my most vicious battle cry as I fumble towards it.

I am degraded to a crumbling, bruised ball of flesh.

I can barely speak, my throat reduced to sandpaper.

Everything hurts and I can taste the bitterness of blood in my mouth. The floor is like ice against my bare legs. Through the tears in my eyes I see the moon shining through a window at the top of the room. It is full and brilliant and illuminates the white of the brick walls that surround me. I realize that there is writing on them. People have been here before me. People will be here after me. Why am I here though? I should not be.

I should be home, where I belong. In bed, with him. Safe. I feel anything but that word in this moment, as terror sweeps through every single one of my nerves.

I whisper in one last futile attempt:

But there is silence. Horrible, deafening, fatal silence.

And it seems to last forever, until I hear it, or think I do. A click, the door unlocking, and the small room is suddenly filled with light. Fluorescence suffocates me.

When I dare to open my eyes, they do not find Henry. Instead I find a police officer looking back at me. He wears broad, black framed glasses that are too big for his face and he looks eerily familiar. A sudden memory of lying in a hospital bed comes to me but does not fully resonate. His face is forlorn and almost disappointed, as if he expected more out of me.

“I thought you were going to hurt yourself,” he tells me. “Promise you’ll stay calm and you can come out for a bit. We’ve got to get you fingerprinted.”

It’s then that I have the shattering realization that I am drunk and in a holding cell at a police station. The reason why escapes me though, as I try to grab onto flashes of sober memories but drown in my current state-of-mind.

I try to breathe with intent as I remember every single arrest-cliché in the book, and I cling to the fact that I am going to get my phone call. They will probably let me go—they have to. If anything, they will make me stay the night at the most.

I remember the silent promise I had once made myself—that the moment I got a DUI that I would put down the bottle for good. Jail was the worst it could get. It had been my crowning achievement at my last three rehabs that I had never graced the inside of a jail cell and I never planned to.

“Continue down the path you have been,” one of the staff members at my second treatment center had told me after sharing her own story about prison, “and jail is a guarantee.”

And here I am. Her words have come to pass, as promised.

I then remember what else she told me as we talked over a pack of Marlboro Reds on a warm Orange County night. 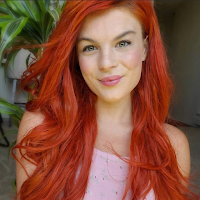 If there is anything Hannah believes in, it’s hope, but that wasn’t always the case. For a long time, chaos was comfortable for Hannah, but at just 22 she would have to make her hardest decision yet: was life really worth living? Since picking up a pen Hannah has had a love for writing, and as an adult it would become her greatest tool in healing from an almost decade-long battle with severe mental illness and substance abuse. Her first book, Tiger Stripes, is a harrowing, raw telling of her year in and out of hospitals, treatment centers, and jail that finally led her on the road to recovery and freedom.

Hannah was born in Orange County, CA but has lived in the Los Angeles area for several years. She now lives in West L.A. with her boyfriend. When she is not writing she can be found reading, running, cooking, or finding the best vegan eats in L.A.!

a Rafflecopter giveaway
Follow
Posted by Kim at 1:45 AM