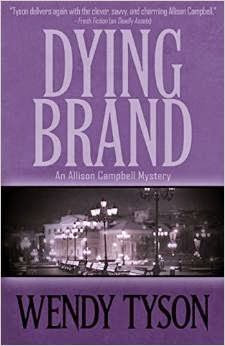 When image consultant Allison Campbell attends an award ceremony to honor a designer friend, she’s thrust into a murder investigation. Only this time, it’s personal.

A former boyfriend is dead, slain on the streets of Philadelphia. His widow claims he was meeting with Allison, yet Allison hadn’t spoken to him in years. Nothing about his death—or life—makes sense. When compromising photos from their past arrive at Allison’s office, they raise more questions than they answer.

Driven to find justice, Allison deconstructs the image her ex had created for himself, looking for clues about the man he’d become. As her hunt for the truth unveils secrets, Allison’s past and present collide—with deadly results.

Hi Kim!  Thank you so much for having me on your blog today!  I’m thrilled to be here.

You are more than welcome.  Your Allison Campbell Mystery Series have been called "edge of your seat" reads.  How do you write your books?  Do you start with the beginning, middle or end or do you write down scenes and then try to figure out how to put them all together?
I usually start with a well fleshed-out concept, which I develop with pages and pages of free writing.  Often I fill a notebook or two with random thoughts, ideas, and characters before I ever put my fingers on a keyboard.  I rarely return to these notebooks again once I start writing, but the process helps me work through my ideas.  Then I start writing.  Only after I have a full first draft do I create a rough outline.  It’s important in a mystery that all of the plot lines make sense and every thread is brought to resolution.  Outlining after a draft is written allows me to locate and fix any gaps.

How do you handle writer’s block?

Pretty much the same way I develop a story concept: free writing.  I love Natalie Goldberg’s book Writing Down the Bones and her other books for writers (highly recommended!).  Natalie talks about the concept of “wild mind,” and to get to wild mind—where the real ideas live—she suggests free writing with old-fashioned pen and paper.  I swear by it.  Whenever I hit a rough spot in a novel, I go back to the notebooks.  It works.

Tell me about your protagonist, Allison Campbell.

Allison is an image consultant on the wealthy Main Line of Philadelphia, and while she helps others reinvent themselves, her best transformation was her own.  A dissertation shy of a PhD in psychology, Allison uses her education and her own experiences as an outsider to do her job—and to solve crimes.

Allison grew up in a small town outside of Philadelphia.  Born to an emotionally abusive father and a loving but chronically ill mother, she didn’t have a lot of support as a child.  After a tragedy with a patient during graduate school, she needed to find a new calling, and she found it working for Mia Campbell, an image consultant on the Main Line.  Allison eventually took over Mia’s business, First Impressions, and married Mia’s son, Jason (only to divorce him later).  Throughout the series, Allison doesn’t forget her roots, though, and it’s the fact that she never quite fits in with the Main Line crowd that makes Allison so good at her job (and detective work).

Wow.  She definitely sounds intriguing.  Do you think some of your character traits are found in Allison, and if so, what are those?

Absolutely—actually, I think some of my character traits are found in each of my characters.  Like Allison, I prefer to be in control (shhh…don’t tell my husband I’m admitting that), and I generally look for the good in people.  Like Vaughn, I tend to be loyal, almost to a fault.  And I definitely have a touch of Mia’s cynicism, especially when it comes to large institutions or “groupthink.”

How much of your background has played a part in writing your series?

My various careers—therapist, corporate lawyer, even veterinarian assistant (pre-graduate school)—have all become part of my literary journey in some way.  I definitely draw on each of these careers when I’m writing, using my experiences to shape my characters and their fictional worlds.  For the Campbell series, I would say my background in psychology has been most useful.  Although Allison is no longer a practicing psychologist, she definitely thinks like one.

What's the wildest/craziest thing Allison has ever done to solve a case?

Allison definitely gets herself into some awkward and dangerous situations.  In Deadly Assets, two of Allison’s clients—a budding pop star from Scranton, Pennsylvania and a reclusive Italian heiress from the Finger Lakes of New York—go missing on the same day and Allison’s business manager, Vaughn, is the last to have seen each.  Worried about Vaughn, who has a troubled past of his own, Allison is desperate to find out what happened to her clients.  While it’s important to me that Allison retain sound judgment, she definitely goes out on a limb in Deadly Assets, tracking a killer on an isolated, haunting Finger Lakes estate and tangling with some very dangerous people.

Dying Brand marks the third book in the Allison Campbell Mystery Series.  How many more books do you see in the series?

I’m thrilled to announce that Henery Press has acquired the next three in the series.  Vicious Looks, Campbell mystery number four, is due to be released in July 2016.

My favorite scene involves Mia and Vaughn.  For those of you who have read the first two books in the series, you’ll recall that they’re lovers despite a significant age difference between them (Mia is twenty years older).  I can’t say too much because I don’t want to give anything away, but the scene was hard for me to write.  It’s very tense.  Every once in a while you write a scene that captures exactly what you were hoping to convey and this was one of those scenes.

I also like the ending.  It’s fast-paced and was great fun to write.

Ahh.  Your favorite scene is your “wow” moment.  As a reader, whenever an author says something was intense and hard to write, I know that it has to be really good.  What's next for you?  I saw that you were planning a cozy mystery.  Can you tell us about it?

I am!  Henery Press has acquired my new cozy series, The Greenhouse Mystery Series.  The first novel in the series, A Muddied Murder, is due out in February 2016—just in time for spring.

In A Muddied Murder, a Chicago environmental attorney returns to her hometown in rural Pennsylvania to care for her spirited grandmother and run her family's organic farm and café.  She gets caught up in a murder investigation when she and the local (hot and single!) veterinarian find the body of the town’s zoning commissioner in her barn.

My husband and I are avid organic gardeners.  A few years ago, we started an urban farm in our area.  Things ultimately didn’t work out, but we still grow almost all of our own produce on our third of an acre near Philadelphia and we’re very active in the “buy local” movement here in Philadelphia.  So in the Greenhouse series, I get to combine two loves—organic gardening and mysteries!

Sounds interesting.  Thank you so much Wendy for taking the time with talk me.

Thank you, Kim!  Such a pleasure to be here!

The Allison Campbell Mystery Series:
(Click on the covers, to purchase the books from Amazon.) 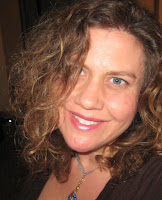 Wendy Tyson is an author, lawyer and former therapist whose background has inspired her mysteries and thrillers. Wendy’s latest novel, DEADLY ASSETS, the second Allison Campbell mystery, was released in July 2014. The first Campbell novel, KILLER IMAGE, was named a best mystery for book clubs in 2014 by Examiner.com, and the third Campbell installment, DYING BRAND, is due out on May 5, 2015. She is also the author of The Greenhouse Mystery Series. The first Greenhouse Mystery, A MUDDIED MURDER, is due out just in time for spring 2016. Wendy and her husband are passionate organic gardeners. They live with their three boys on a micro-farm outside of Philadelphia.