7 Things Every Aspiring Author MUST Do by Chelsea Walker Flagg, author of I'D RATHER WEAR PAJAMAS 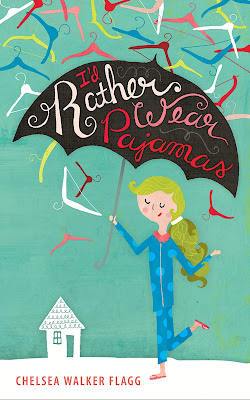 Everybody has the awesome opportunity to find their own strength and path through life. Some come about their self-discoveries through studying and working hard. Others (Chelsea) spend their time nearly burning down kitchens and driving around the country with a car full of hangers.

Chelsea grew up wanting to be “strong.” She thought arguing her way through childhood and becoming a world-class attorney would get her there. But, through a series of humorous, and only slightly embarrassing events, Chelsea comes to realize that maybe her strength is meant to shine in different ways.

“I tried to contain my excitement when my second grade teacher announced that our school’s Professional Day was coming up and we were all encouraged to dress up as what we wanted to be when we grew up. Now, just try to picture what your local veterinarian looks like and what they might wear on a daily basis to stand out from other occupations. You can’t, right?
Some parents had it easy; I mean how hard is it to make your child look like a firefighter or a member of middle management? My poor mom had a bigger task at hand. That’s why my costume ended up including a white bathrobe which I think was supposed to be a labcoat and an old pair of tortoise-shell sunglasses (lenses removed). In one hand I carried one of my million stuffed animals and in the other, a clipboard. I’m not entirely sure how a clipboard was going to prove that I was a veterinarian, but I was confident that if the clipboard didn’t give it away, the broken sunglasses definitely would. In a low childhood moment for me, not a single person - student or teacher - could guess what I was.
Even with the setback, I still knew I’d be the world’s best vet. My favorite animals by far were cats. To give you an idea of how in love with cats I was, imagine the person or thing that you love more than life itself, and then times that love by 100. I think it’s fair to use the word obsessed.

7 Things Every Aspiring Author MUST Do
1.  Just Start Writing
I’ve always loved writing. I was that nerdy third grader who brought my “books” in every couple of weeks and begged my teacher to let me read them to the class. I still have the  stories; they were real winners. My own personal favorite was probably Sharks in the Toilet, wherein a little boy finds a shark named Spike in the toilet at school and they form a little bond. I’m shocked it didn’t win a Newbery Award.
Anyway, writing is a passion of mine, but years and years went by when it just didn’t happen. And, now that I’m on the boat again, I’m sad that I made all those excuses to not write. Just start writing.
2.  Organize Your Thoughts
Single-handedly, the best advice I got when I started my book came from a friend, who told me how to organize my thoughts. I know firsthand, laying out an entire book is really daunting. So, I’m going to share the secret with you that he shared with me. Come in a little closer... Create a separate file for every single chapter. That gives you the flexibility to work on chapters out of order, to go back and edit things easier. That tip alone made it possible for me to tackle the task of writing a book.

A screenshot of my book, I’d Rather Wear Pajamas as I saw it every day. Google Drive all the way baby!
3.  Write Like Your Life Depends On It
I was surprised to learn that the phrase I hear most often these days is “how in the world did you write a book with three little kids running around?” After sticking lollipops in each of my children’s mouths to quiet them down enough to hear the question again, I shrug and smile coyly, as if I’ve cracked open the lock to a big secret. I’m here to bust myself. There’s no secret; I just write every free minute I can. The two minutes after I put my kids to sleep and before I pass out myself. Sitting in the locked bathroom, ignoring the fingers poking under the door and just hoping for five seconds of peace before I forget my thoughts. And on very special occasion, alone and completely uninterrupted at a coffee shop, enjoying a latte with nobody on my lap. Hang on, I’m going to take a few seconds to fantasize about that. 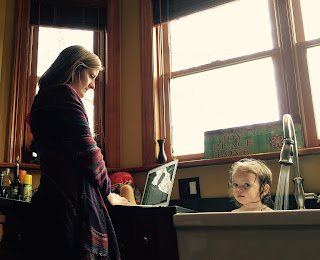 One of my favorite cheats is throwing my kids in the kitchen sink for “fun bath time.” You’d be amazed how long they’ll leave you alone when they’re trapped in there.
4.  Find Your Own Style and Voice
There are a million and one writers out there trying to “make it.” What makes you different from them? I’m an avid reader, and I definitely notice my writing style shifting depending on the book I’m into at any given time. We’ve all got a little bit of lemming in us; we feel comfortable following behind someone who has already succeeded. And that’s great, to an extent. We should all glean inspiration from others. But, it’s important to put your own twist on the styles you pick up from others. That’s what agents and publishers and readers are looking for: your true and unique voice.
aaaand...cue inspirational illustration. 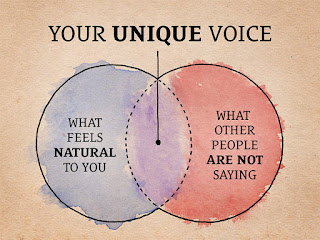 5.  Create Your Plots and Characters...Then Throw Them Away and Create Them Again
There’s a list floating around out there called The 22 Rules of Storytelling, According to Pixar. It’s a must-read for any writer. My favorite thing about it is how it encourages people to have their plots and characters in their head, but then to allow themselves to dig way deeper than they planned to. It’s impossible to imagine a perfectly rich and complex situation without running through it a handful of times. Get your basic ideas down on paper, and then shred the crap out of them to unveil the richness beneath the surface.
6.  Learn to Love Criticism
I grew up playing the flute (nerd alert), and I performed a lot. I knew I was a great player, but I also knew I wanted to get better. At first, the praise was really nice, but after awhile I actually found myself wanting to hear criticism. Don’t get me wrong, I’d never turn down a compliment, but I wanted to know how I really sounded, beyond the obligatory compliments people give. I actually feel the same way about writing. I LOVE hearing that people love my writing, but I also appreciate any type of honest feedback because it helps me get better and to find my niche audience. Of course, I haven’t received any really nasty feedback yet, so maybe ask me about this point after that happens.
7.  When It Gets Mundane, STOP
In my mind, this is HUGE. So huge, I had to capitalize that whole word. We write because we love it, right? Yes, we work on deadlines and yes we want to get stuff done, but don’t force it when it’s not coming to you. Sure, you’ll get words down on paper, but most of those words will be complete mumbo jumbo (I’m pretty proud of myself for throwing the phrase “mumbo jumbo” in a blog post, by the way. Can I get an amen?) Anyway, allow yourself a break. Pour yourself a glass of wine and kick back for a bit, letting your creative juices recharge. Which reminds me...I’ve got a glass of wine calling my name.

Chelsea was once obsessed with cats, longed to live in a big city, didn't think she would ever have children, and aspired to be an attorney. She now lives in Boulder, Colorado as a stay-at-home mom and comedic writer with her husband and three daughters. She has no current plans to own a cat.

a Rafflecopter giveaway Follow
Posted by Kim at 1:08 AM