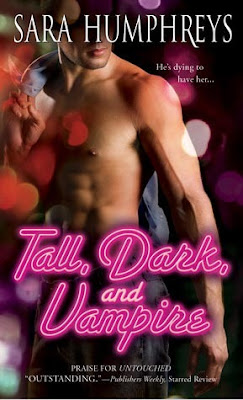 She always knew Fate was cruel...

The last person Olivia Hollingsworth expected to see at her Greenwich Village vampire club was her one true love, Doug Paxton—whom she believed to be dead for centuries. Olivia thought she had moved on, but when Doug reappears, her heart knows she'd rather die than lose him again.

But this is beyond the pale...

Ever since Doug can remember, a red-haired siren has haunted his dreams. He never thought she could be real until he goes to investigate a murder at Olivia's night club. However, as the bodies keep piling up at her feet, he must fight to prove her innocence—even if it costs him his life...

REVIEW
Tall, Dark, and Vampire is the first book in the Dead in the City series but I have actually read 2 other books in this series.  I have a great appreciation for the way that Sara Humphreys has sort of reinvented the whole vampire lore.  Tall, Dark, and Vampire gives some interesting insight into the origin of vampires as well as angels.  In addition, there’s mention of demons, shapeshifters, and other supernatural creatures.  The fact that there is this whole other world of creatures that coexist is fascinating.  Even more fascinating is that these creatures walk the earth along with humans who are totally oblivious of their existence yet humans have their own fairy tale stories of their existence.

Tall, Dark, and Vampire focuses on three hundred-year-old vampire Olivia Hollingsworth and the emergence of some rogue vampires that are killing humans outside of her nightclub called The Coven in New York City.  These killings appear to be related to one of Olivia’s younger progeny which brings unwanted attention to the actual coven.  This attention comes from both the local PD and The Presidium which governs the vampires in that area.  Even in the vampire world, there are laws that must be followed.  In addition, Olivia is caught off-guard when she meets a homicide detective named Doug Paxton who unbeknownst to him is a reincarnation of her lost love.  The two of them have been “dreaming” about each other for years.  Of course, their undeniable attraction becomes a distraction because they both want answers and only one of them has centuries of wisdom and resources to figure it all out.

The sexual tension between Doug and Olivia is thick and when they give into it, you will need a cold shower.  Doug and Olivia are truly meant to be together and it’s easy to see why.  When the mystery behind the rogue vampires is revealed, vampire lives are changed forever.  I will make it a point to read any of the books in the series that I have missed because I just have to know everything else about the supernatural world that the author is willing to provide.  Sara really knows how to create a paranormal world that makes sense without abandoning everything that we have come to know about it.