Interview, Excerpt & Giveaway ~ A SHOT AT LOVE by Peggy Jaeger 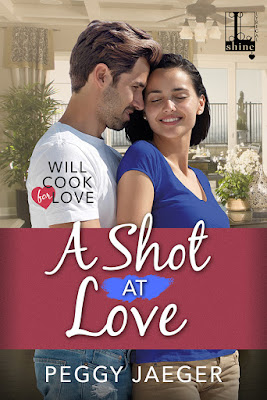 Nothing’s impossible when love is on the menu. In Peggy Jaeger’s luscious series, the only thing more tempting than a delicious meal is a truly delectable romance . . .
Look for exclusive recipes in each book!

Photographer Gemma Laine is looking for arresting faces on the streets of Manhattan when her camera captures something shocking—a triple murder. In that moment, she becomes a target for the mob—and a top priority for a very determined, breathtakingly handsome, FBI special agent. With deadlines to meet and photo shoots on her calendar, Gemma chafes at the idea of protection, but every moment she spends under his watchful eye is a temptation to lose herself in his muscular arms ...

With two of his men and one crucial witness dead, Special Agent Kyros Pappandreos can’t afford to be distracted. But Gemma is dazzling—and her connection to Kandy Laine’s high-profile cooking empire makes her an especially easy mark for some very bad people. Keeping her safe is much more pleasure than business, but as the heat between them starts to sizzle, Ky is set to investigate whether they have a shot at love …

Hi Peggy.  Welcome to Read Your Writes Book Reviews.  How are you?
Hi Kim. I’m doing great and I’m thrilled to be here, today!

Tell me about your Will Cook for Love series and what readers can expect from it.
WILL COOK FOR LOVE centers around the Laine family. 7 sisters, with Kandy Laine, the oldest and the de facto head of the family. Kandy is a cooking wunderkind. She has her own cable food show that’s been tops in the ratings for several years, and she is very loyal to her family. Most of them work for her in some capacity. But to hear her tell it, they don’t work for her, they work with her. That tells you the kind of person she is right there. Book 1, COOKING WITH KANDY, is her story. She’s being stalked, so her cousin hires bodyguard/Private Eye, Joshua Keane, to investigate. These two create sparks on the page from the minute they meet. Book 2, A SHOT AT LOVE, is Kandy’s younger sister, Gemma’s, story. She’s a professional photographer and witnesses the mob execution of an informant. Because she’s so good at what she does, she actually photographs the execution, giving FBI Special Agent Kyros Pappandreos some information he badly needs to get the murderers. The fact that she also now needs 24 hour protection doesn’t slip his mind either. Book 3 is Stacy Peters, Kandy’s cousins’ story. She’s been Kandy’s producer for years, but when she’s given the opportunity to executive produce a new food tv series, she leaps at it, especially when she’ll get her own show in the bargain. The only drawback? The director of the show she needs to executive produce, Nikko Stamp. He isn’t called Nitro Nikko for nothing.

Tell me about FBI Special Agent Kyros Pappandreos and Gemma Laine.
Is it too corny to say he’s the ying to her yan?

No. Not at all.
Where Gemma’s moods are mercurial, her temper quick and blasting, her passion’s absolute and consuming, Ky is her opposite. Slow to anger, and even when he does he rarely let’s go of it, logical, and thoughtful, he’s the perfect man to temper her. The fact that the two of them are proficient in martial arts and weapons, and are fiercely loyal to their families, adds some ease to their relationship.

Them seem perfect get each other, with a lot in common.
Gemma guards her heart. Her father’s betrayal of her family when she was a child still angers her to this day. She’s vowed never to be in the position her mother was: in love with a man who thought nothing of cheating on her religiously, dependent on him for every cent and means of lifestyle. When her father left them, Gemma’s mother had never worked, didn’t know how to balance a checkbook and had no formal education other than a high school diploma. Gemma pushed herself, rising to the top of her profession and proudly wears the mantle of independent woman.

The strange and unfamiliar emotions she’s feeling for Ky, though, are threatening her well honed persona.

What do you love about them?
The thing I love the most about Gemma is her badass-ness. She can shoot a gun like nobody’s business, plus she has black belts in a few martial art disciplines. When I envisioned her character arc, I knew she was the Warrior sister. She’ll defend anyone who needs it, is fiercely loyal and above all else has an innate sense of right and wrong.

I fell in love with the thought of Ky before I ever wrote him. He exemplifies – to my mind – the man who lives for duty and service. He went into the FBI straight out of college and has never looked back. To serve, protect, and honor are traits woven through his soul. Combine that with an inner calm that helps those around him from losing control, and you’ve got one of my perfect male archetypes: the Knight. He is committed to righting wrongs, failure is not an option, and he never goes back on his word.

You gave Gemma and Ky very admirable traits.  With a series called Will Cook for Love you definitely have to include recipes in the books, which you do.  Are these recipes easy for a novice or do you have to be skilled to make them?
Listen, they all come from my own recipe books, so believe me when I say – ANYONE can make them!!! If I can do it, you can, too! I learned how to cook from a very young age so I wouldn’t go hungry. I was a latch key kid and my parents worked until late each evening. I knew I needed to learn to fend for myself if I didn’t want to starve until they got home. I borrowed cooking books from my local library and read them religiously cover to cover. The easier the recipe, the happier I was! I still live that rule.

Great.  What’s your favorite part of a romance to write?
For me it’s the first emotional awareness the Hero and Heroine have about one another. This usually doesn’t come at the same time for them. He’ll notice something about her first, or vice versa, that will lead to a little introspection about…stuff (!) If they’ve been at cross purposes, or don’t really like one another up to this point, their conflict causes this awareness to be a pivotal emotional shift that sets up the rest of the story. Awareness can take many avenues. In A SHOT AT LOVE, Gemma is an exceptional observer.  It’s what makes her such a talented photographer. The first time she sees Ky pummeling a punching bag, she realizes how much coiled tension is inside him, and how he purposefully keeps it leashed. She’d thought him cold, calculating, arrogant and uber-logical until this moment. Seeing him, observing him in the raw, so to speak (he is clothed!) she realizes his outer cool and professional persona is masking an internal hotbed of emotion. And it gets her hot. All over.

(Kim’s a little speechless.)  Did I mention that I’m really liking Ky? Can you tell me about your favorite scene from A Shot at Love?
Oooo. That’s like asking a parent to choose their favorite kid!! I love them all, but the scene that means the most to me and that defines their relationship for the remainder of the book is the grappling scene in the basement of the safe house. Ky is impressed and a little awed at Gemma’s martial arts and defensive skill prowess and when he tags her to practice her hand to hand technique, he tries to convince himself it’s just so he can make sure she could protect herself if need be. The minute he feels her skin under his hands, and is so close to her he can detect the line of varying blues in her eyes, he knows he’s lied to himself. Assuring she can protect herself is just an excuse to get his hands on her.

Love when he comes to that realization!

Peggy, thank you so much for taking the time to answer some questions for me.
Oh, please! It was totally my pleasure. Thank you for having me!

You are more than welcome.  Let’s give readers a taste of A Shot of Love, shall we?  I hope you guys enjoy this excerpt.

“How many do I have to hit for you to be satisfied?”

Ky looked over to where she stood to the side of the garage, the Glock in her hand, its barrel aimed at the ground. He’d watched her load the clip, then weigh and balance the gun in her hand like she did it every day of her life.

“All of them. You might never get a second chance if a first bullet misses an attacker, so yes. All of them.”

She moved to the line in the grass he’d drawn for her to shoot from, mumbling something he couldn’t hear, but guessing it wasn’t something complementary.

“Yup. Any particular order you want me to hit them in?”

He had to bite back the grin threatening to fly free at her snooty, disgruntled tone.

The first bottle, the one he’d put the farthest from them, shattered into a thousand fragments. Before he could take a full breath, she’d hit the next two.

The final three closer ones she dispatched with equal ease.

When she turned to him and asked, “Satisfied?” in a tone filled with condescension, Ky had to physically restrain himself from running to her, lifting her up in his arms, and kissing the gorgeous smirk off her mouth.

Because he’d discovered how much he liked sparring with her—go figure that out—he pursed his lips and nodded. “Not bad.”

The Will Cook for Love Series:

Peggy Jaeger is a contemporary romance writer who writes about strong women, the families who support them, and the men who can’t live without them.

Family and food play huge roles in Peggy’s stories because she believes there is nothing that holds a family structure together like sharing a meal…or two…or ten. Dotted with humor and characters that are as real as they are loving, Peggy brings all topics of daily life into her stories: life, death, sibling rivalry, illness and the desire for everyone to find their own happily ever after. Growing up the only child of divorced parents she longed for sisters, brothers and a family that vowed to stick together no matter what came their way. Through her books, she has created the families she wanted as that lonely child.

Tying into her love of families, her children's book, THE KINDNESS TALES, was illustrated by her artist mother-in-law.

Peggy holds a master's degree in Nursing Administration and first found publication with several articles she authored on Alzheimer's Disease during her time running an Alzheimer's in-patient care unit during the 1990s.
In 2013, she placed first in two categories in the Dixie Kane Memorial Contest: Single Title Contemporary Romance and Short/Long Contemporary Romance.

In 2017 she came in 3rd in the New England Reader's Choice contest for A KISS UNDER THE CHRISTMAS LIGHTS and is a finalist in the 2017 STILETTO contest for the same title.

A lifelong and avid romance reader and writer, she is a member of RWA and her local New Hampshire RWA Chapter.


You can follow the A Shot at Love Blog Tour here.