Review ~ SONG OF THE SOUL by Lisa Kessler 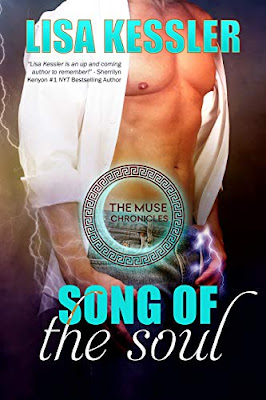 His destiny is tied to hers…

Mikolas Leandros carries the Guardian’s mark, and has been working behind enemy lines trying to protect the Muses from the Order of the Titans. The moment he lays eyes on Trinity Porter, the Muse of Music, a power awakens inside of him, a primal need to protect her.

Trinity has lost two of her Muse sisters to the Order of the Titans, and just because the sexy Greek billionaire claims to be her Guardian doesn’t mean she can trust him.

With Kronos on the loose, the stakes couldn’t be higher as Trinity and her sisters open the legendary Theater of the Muses. But the longer Mikolas works at Trinity’s side, the more he comes to realize that love is the only thing worth fighting for, and in the end, love could save them all.

Kronos, the King of the Titans and God of time, has broken free and walks among us. In his human form he is Kevin Elys. His primary goal is to hurt his son Zeus, by killing his nine reborn daughters known as muses. Kronos’s secondary goal is to destroy the world.

For a millennium, Zeus has known his father would return. The question was when. “Every generation the nine daughters of Zeus are reborn, and with their rebirth are also nine Guardians. They will be marked by the gods, and given gifts to protect his treasure. Their abilities will only be unlocked when they find their muse.”

This generation of muses has been brought to Crystal City by a vision. They are to work together to restore Les Neuf Soeurs, Theatre of the Muses, to inspire mankind through science and the arts. “Destiny is playing out in Crystal City. This generation will decide the future of mankind.” Several of the muses have found their guardians. A few have been killed by the Order of the Titans. Only Trinity Porter, the Muse of Music, remains single and without a guardian. Not having a guardian makes Trinity an easy target for Kevin and what’s left of the now dismantled Order of the Titans.

To the world, Mikolas Leandros is a Greek billionaire and head of Belkin Oil. But he is actually so much more. Since he was a child, Mikolas has known he was marked to be a guardian, as was his grandfather before him. In a move to protect muses and the world itself, Mikolas’s father and grandfather have put him in the position to head up Belkin Oil and the American division of the Order. However, Mikolas’s covert operation has made him an enemy of this generation of muses and their guardians. Believing his muse was murdered by the Order before he arrived, Mikolas just wants to help protect the other muses and stop Kronos. When Kronos goes after Trinity, Mikolas knows he’s meant to be her guardian. “I’ll fight until my last breath to protect you.”

The Guiders of Destiny have played a long game, and the end is in sight. “You think the danger has passed? Far from it.” Kronos is tired of playing around. He wants Zeus and his daughters to suffer. To that end, he unleashes his brother Iapetus, the Titan of Mortality, the Piercer to help him. An unlikely hero emerges and offers the guardians a fighting chance against Kronos and Iapetus. To ultimately defeat these Titans, the guardians will have to fight together and call upon higher powers. The muses will have to come together, stand tall, and show the beauty of the mind and the heart of mankind.

Lisa Kessler has ended the Muse Chronicles series nicely. Song of the Soul is an enemies to lovers story. Events in past books had Trinity hating and not trusting Mikolas just by his name and the sight of him. But Mikolas stood by his honor and beliefs and gained not only the trust and respect of Trinity, but the other muses and guardians as well. Song of the Soul and the conclusion of the series did not play out the way I thought it would. However, Lisa did throw in some people and characters I didn't expect. She also managed to bring tears to my eyes.

To a certain exist, Lisa has written details on past characters and events into this story. But I really think to fully understand events in this book, you need to read the whole series, or at least start with Breath of Passion.