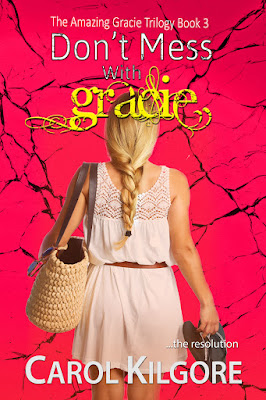 The mysterious Mr. Ott is trying to intimidate Gracie Hofner into being his internal spy at The Bastion Group. She’s learned a lot about him through several sources, even using information provided by the pair of ghosts trying to save their granddaughter. But it isn’t enough. Mr. Ott is an expert in hiding his true identity.

Gracie isn’t as worried for herself as she is for her family, her friends, and her new tenant, Milo Porter. Her feelings for him have grown, but she can’t show them. Mr. Ott’s threats involve those she loves, and one friend has already been killed. Besides, she’s certain there is someone else in Milo’s life.

It takes Gracie and her growing support team to unmask Mr. Ott, but it’s what Gracie learns along the way that shows readers the wisdom of the advice Don’t Mess with Gracie.

This is the conclusion to The Amazing Gracie Trilogy—a story so big it takes three books to tell it. Gracie’s adventures begin with Jalapeno Cupcake Wench, continue with Bluebonnet Ballerina, and conclude here.

Gracie’s heart still pounded from the fall, but as she completed the half-turn, her eyes locked with Milo’s. Her whole world zoomed into focus. Her heart stilled to its normal beat. What was going on? Milo looked different. She didn’t know him well, but she’d never noticed such an intensity. It was as if he were exploring her soul. Only one tiny muscle on the left side of his jaw moved. He hadn’t shaved, and she had a wild desire to run her fingers over the blond stubble to quiet the movement, soothe him.

He’d gotten a haircut. His shaggy hair was tamer. Why did she tingle inside? Maybe something ruptured. Milo continued to study her. She drank in his attention.

His eyes—I feel like he’s kissing me with just his look. Her knees shook. “Do you know one of your eyes is greener than the other?” Oh, stupid! Of course he knows. He sees them in the mirror every day.

“I do know that.” He smiled. “Baseball bat to the browner one when I was a kid.”

The spell was broken. Gracie blinked before glancing toward the door. A woman who looked like Milo except with long hair and makeup hurried toward them.

Milo squeezed Gracie’s shoulders. “Cameron, this is Gracie Hofner, my landlord’s niece. Gracie, this is my sister, Cameron.” He nodded toward the woman standing two feet away. 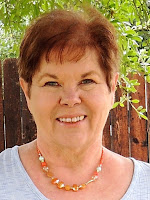 Carol Kilgore is the award-winning author of the three books in The Amazing Gracie Trilogy: Jalapeno Cupcake Wench, Bluebonnet Ballerina, and Don’t Mess with Gracie.

In addition, she is the author of In Name Only, Solomon’s Compass, and Secrets of Honor, three standalone romantic suspense novels set along the Texas Gulf Coast.

She and her husband live in San Antonio, the setting for the Amazing Gracie books, with two quirky herding dogs who still require help opening the food bin and the door.

You can follow the Don’t Mess with Gracie Blurb Blitz here.