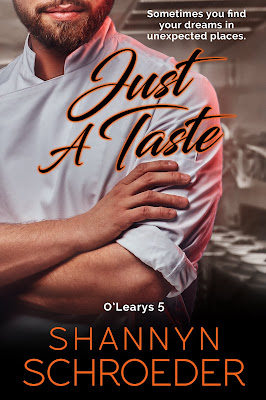 Grief brought them together. Will love seal the deal?


Still reeling from her father’s death, Carmen Delgado has no idea what it means to have dreams of her own. But when sexy Liam O’Leary inherits a share in her dad’s successful food truck, Carmen is suddenly free to explore her life—never expecting Liam to provide a tempting path.

Running Gus’s Taco Taxi isn’t exactly what talented chef Liam pictured as his dream job. However, as he and Carmen team up, things in the food truck heat up and it’s not just the food. Now it’s up to him to show Carmen everything she deserves in life. His Irish charm can be irresistible. After just a taste, will Carmen find what she didn’t realize she needs?

Just a Taste was one of those books I liked from the start. Having read all the books in this series, except for one, Liam was the only O'Leary family member who was a mystery to me. Unlike the other male members in his family, Liam doesn't own a bar. He's actually a chef and has worked his way up from dishwasher to executive chef at various restaurants throughout Chicago.

Liam is at a crossroads in his professional career. He wants to open his own restaurant, but he's a little leery to do so. A chance to be his own boss comes his way when he receives news that his first boss and mentor Gus Delgado has passed away, leaving him as part owner of Gus' Taco Taxi food truck. The other owner is Carmen Delgado, Gus' daughter. Gus knew that Carmen would have a hard time with his death and would also be lost. In a letter to Liam, he asks him to take care of the food truck and Carmen.

At twenty-seven, Carmen has lived her life for her parents. After their deaths, she doesn’t know what to do with herself. She never truly wanted to be in the restaurant business. In fact, she tries to avoid the food of her culture like the plague. Carmen sees herself as fat and not the beautiful woman she is.

Carmen and Liam start a friendship that blossoms into a full on committed relationship. Having remembered what it was like when he lost his father, Liam wants to be there for Carmen, who has now lost both of her parents. I liked that this was a story about finding yourself. Liam is so good for Carmen. He has the ability to see through the image Carmen wants the world to see. He manages to get her to fall in love with food and step back into the living world.

I was also surprised by how the story played out. I was sure the conflict for these two was going to be another person coming into the picture. But that wasn’t the case at all. I loved that Shannyn didn’t follow the blueprint for a lot of romantic stories.

I felt as though Just a Taste ended too quickly, which could be a sign that this was a really good book. I’m looking forward to the next book in this series.