Review ~ DEATH WAITS IN THE DARK by Julia Buckley 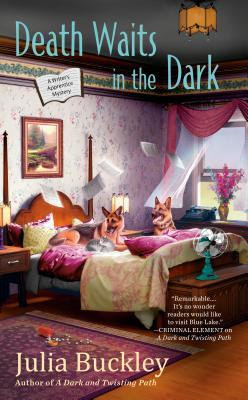 Writer's apprentice Lena London is back and better than ever when her friend bestselling suspense novelist Camilla Graham needs help solving a town murder that hits a little too close to home...

It's summertime, and Lena and Camilla are busy working away while a town vandal runs amok. Things get even more complicated when Jane Wyland pays Camilla a not-so-friendly visit and gives her an ultimatum: reveal Camilla's husband James's family secret, or she will. Lena assures Camilla that nothing will come of the woman's threats, since the family has no secrets to hide.

When Jane Wyland is later found dead, they're convinced that whatever secret she was planning to expose led to her death. With Lena's assistance, Camilla is determined to solve the case before the finger points at her...

Julia Buckley’s A Writer’s Apprentice Mystery series is one of my favorite cozy mystery series. I've said this before, I don't read this series to try and figure out who the killer is. I read it to simply enjoy where Julia and the story takes me. I love the main and secondary characters. Every time I open a book, it's like hanging out with old friends.

In the course of less than a year, Lena London has moved to a new town. She’s met Camilla Graham, mystery author and her childhood idol. Lena is living out a dream, by co-writing books with Camilla. She even lives with Camilla, in Camilla’s large castle like house. More importantly, Lena has found love with her neighbor Sam West. Death Waits in the Dark is the fourth book in the series. But it is the first book that isn’t about Sam and him dealing with his past, thus making it a standalone read. Death Waits in the Dark deals with Camilla’s past. Or more accurately, the past of her late husband James and his friends, including Adam, Camilla’s new beau and James’s best friend. The story chronicles the love James has for Camilla through letters. In fact, this story is about love, friendship, courage, strength, and humanity.

I love the way the mystery played out. Julia has written this story in such a way that you can’t help questioning everything you read. For me, there were definitely some heart pounding, heart stopping moments. I loved the ending of the book. But at the same time, I didn’t want it to end. I’m looking forward to the next book in this series.

You can read my interview with Julia, discussing the series here.