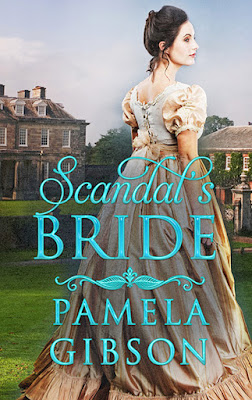 Lady Gwendolyn Pettigrew longs to be a mother, but refuses to marry the lecherous old fool her father has found for her. When her best friend convinces her to consider her husband’s younger brother as a suitable candidate, Gwen agrees to a marriage of convenience, hoping against hope that her dream of becoming a mother will have a chance.

The Hon. John Montague, a penniless younger son, is handsome, witty, and thrilled that a woman with a dowry has agreed to wed him. Best of all she’s a fiercely independent bluestocking, a woman who won’t want to bother with a family. Because John has a shocking secret. He’s vowed never to bring a child into the world, a child who, like his own mother, might carry the strain of madness.

As secrets unfold, tension grows, threatening the fragile bonds they’ve forged. Worse, someone wants them to abandon their home and leave Yorkshire, and they’ll stop at nothing to make it happen.

Hi Pamela. Welcome to Read Your Writes Book Reviews. How are you?
I’m doing pretty well. I’m still getting used to the desert after living so many years in Northern California’s wine country, but Nevada has its beauty, too.

It definitely does. I love seeing all your photos on social media. You started your romance writing career writing contemporary romance. Over the last couple of years, you’ve branched out into the world of historical romance. What drew you to writing these genres?
I started writing contemporary romance because I thought it would be easier for me to hone my craft writing about things I know. My Love in Wine Country series was launched and five books and four novellas later, I still write in this series.

I’ve always been a reader and when heavily pregnant with my first child, a kind bookstore lady suggested I might like Regency romance. Good escape, she said. She was right and I became a voracious reader of all things Regency and Victorian. A couple of years ago I decided to write a Regency. When Scandal’s Child won a few contests and was picked up by Soul Mate during a final round, I was told I had a good voice for historicals—not too ponderous, not too detailed—and my new genre came into being.

Your latest book is the Scandal’s Bride. It’s the sequel to Scandal’s Child. How are these two books related or connected?
My hero and heroine, John and Gwen, are characters in Scandal’s Child. John is the younger brother of Jeremy, the hero of the first book. When they learned their mother was deranged, he was the one given the unpleasant duty of learning all he could about madness and places to keep the “gently bred” who were no longer sane. It haunts him and this knowledge is the inciting incident that he carries into Scandal’s Bride.

Gwen is the spunky, impetuous friend of Miranda, the heroine in Scandal’s Child. She’s about to be affianced to an old reprobate and will do anything to get out of the betrothal, including a marriage of convenience to her friend’s brother-in-law. John needs to marry a woman with a dowry to repair the crumbling estate he inherited. They agree their marriage of convenience will be perfect—until it isn’t.

Lady Gwendolyn Pettigrew and Hon. John Montague sound very interesting. What can you tell me about them?
Lady Gwen is a bluestocking who loves books and independence. She also longs to be a mother, but not bad enough to marry the odious man her father has reluctantly chosen for her. She’s given a short time to find her own husband and she runs to her friend Miranda to help her.

John, a soldier returned from the wars, needs money. But who will marry a penniless second son? Miranda has the perfect solution. John and Gwen, who met briefly years before, agree to marry. They like each other and become friends. But when John seems reluctant to consummate the marriage, Gwen begins to have doubts. Her nasty sister-in-law has fat-shamed her, and she thinks she’s unattractive. What’s really going on is John has become infatuated with his wife, but does not want to bring children into the world because he believes madness is inherited and his mother is definitely balmy. This dilemma is revealed early in the book and its emotional impact takes its toll on my characters as they try to fight off their growing attachment. Gwen the optimist and John the wary one, nearly have a role reversal by the end of the book, but it’s a romance, so they eventually find common ground and their happily ever after.

Tell me how you came up with the titles for these books. The word “scandal” is found in each title. Does this have something to do with the plot of the books?
Scandal’s Child was meant to be a stand-alone. The title refers to Miranda, whose mother scandalously ran off with an actor, leaving her husband and child behind. It also refers to Phoebe, the half-sister of Jeremy and John, the child of their father’s mistress, who is blind and becomes Miranda’s charge. When I realized there would be a sequel, I decided to keep Scandal in the title and Scandal’s Bride was born. It refers to Gwen who marries in unseemly haste, but there is also a reference to John who was always “a scandal waiting to happen.” John comes back and says (in that scene), “if I am a scandal, then Gwen is scandal’s bride.”

There seems to be a small mystery involved with the story. Can you tell me a little bit about it, without giving too much away?
John inherited an old abbey with a few ruins and one building that serves as a manor house. He never met his maternal grandmother who left it to him. When accidents occur he and Gwen decide they should investigate the origins of the estate and its history. That’s when they discover a bizarre turn of events and other interested parties who may have a more solid claim to the property (or think they do).

That sounds very intriguing. Tell me about one of your favorite scenes from the book and why it’s a favorite.
I think my favorite scene in the book is when John and Gwen finally decide to consummate the marriage (there are legal reasons why they must) and they’re both nervous. They talk about it, decide it’s going to be very clinical, over with quickly, lots of precautions. And when they begin, everything they discussed is forgotten in the heat of the moment.

Lol. That does sound like a fun scene. If Gwendolyn and John were sitting here with us, what would they say about you as an author?
I think Gwen would like the fact that she was never rule-bound and was able to make her own decisions, although women in that time period were pretty powerless. John’s only complaint would be that in the beginning I didn’t give him many opportunities to be heroic and he hopes readers will forgive him for hiding so much from Gwen. Romeo the cat is indignant because he thinks he should have had a much bigger role.

What are you currently working on? Well there more books in this series?
There will be a third book in the series. Scandal’s Promise is barely started, but I’ve worked out the major points (in my head). Being a pantser, those points might change as I get into the actual writing. In the meantime I have a fifth contemporary novella (a mystery) coming out in November and I am trying to finish the sixth and final book in my Love in Wine Country series.

You are a very busy lady. Pamela, thank you so much for taking the time to answer some questions for me.
You’re welcome. Thank you for having me, Kim.

He removed his waistcoat, laying it over the topcoat, and sat down opposite Gwen. “Gwen . . .”

They both laughed, and it was a good feeling. He drained his wine glass. “Drink up. I want to talk to you before we retire.”

Her eyes widened, and her breath seemed to catch. Was she feeling faint? He certainly was. Why had he left this so long? Most people consummated their marriage the first night.

She picked up her glass and took a hefty swallow. Her cheeks were as pink as her dress, and she looked as good as an iced sweet in a bakery window, something he’d like to swirl his tongue around and gently taste.

Get on with it.

He took a deep breath, scooted his chair closer to hers until their knees touched, and took one of her hands in his. Her fingers were long and well-shaped. He wondered what they would feel like on his . . .

They laughed again, and their merriment gave him an opening. He placed his hand behind her head, leaned in, and took her bottom lip in his mouth, nibbling as he watched her face. She was as wide-eyed as he was, not even trying to move away. Then her lashes fluttered, and her eyes closed as she moved closer, inviting him to deepen the kiss. She moaned as his lips closed over hers, and he was totally undone.

Author of eight books on California history and twelve romance novels, Pamela Gibson is a former City Manager who lives in the Nevada desert. Having spent the last three years messing about in boats, a hobby that included a five-thousand-mile trip in a 32-foot Nordic Tug, she now spends most of her time indoors happily reading, writing, cooking and keeping up with the antics of her gran-cats, gran-dog, and gran-fish. Sadly, the gran-lizard went to his final reward. If you want to learn more about her activities go to https://www.pamelagibsonwrites.com and sign up for her blog and quarterly newsletter. Or follow her.

You can follow the Scandal’s Bride Blog Tour here.