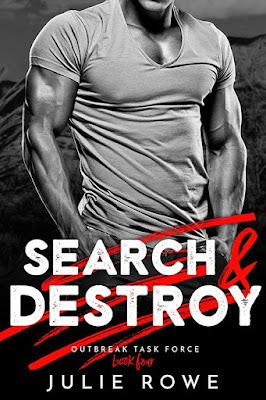 Dr. Carmen Rodrigues, CDC’s Outbreak Task Force director, is on the hunt for a killer–– an airborne virus spreading from Florida across the States, gaining traction with each passing moment. Although she’ll never forget her one night with sexy bodyguard John Dozer in Afghanistan, his protective nature is one distraction she doesn’t need right now.

Ex-Army Intelligence officer John Dozer will put his life on the line for beautiful, independent Carmen. Every. Time. Even when she pushes him away. And now, with her struggling to contain an outbreak likely triggered by domestic bio-terrorists, maybe even insiders at the CDC, she needs him more than ever. He lost her once. He’ll never let that happen again.

Search & Destroy is the fourth book in Julie Rowe’s Outbreak Task Force series. I would generally say that this could be read as a standalone but so much has happened that I just don’t think it would be as enjoyable without getting the full history of the series at this point. Each book focuses on the CDC’s Outbreak Task Force members and the romances that form within each two person team. In addition, the Task Force has been dealing with homegrown terrorists who launched their initial assault in book one, Viable Threat, and continue their reign of terror throughout the series, affecting each team.

We finally get to find out about the leader of the Task Force in this book. Dr. Carmen Rodrigues is the Director of The Outbreak Task Force and she is a strong woman. She also just so happened to have had a prior relationship with her Homeland Security Liaison John Dozer back in Afghanistan a lifetime ago. Things ended abruptly and John never thought he would see her again until he was assigned to her team. They keep each other at arm’s length until Dozer is almost killed and Carmen takes it upon herself to keep him safe. The terrorists have shown a special interest in getting rid of both of them which causes Dozer and Carmen to be in close quarters as they work to eliminate the threat. Of course, feelings get brought out into the open and they have to decide if they can overcome their past and fall in love again.

I really loved Search & Destroy. Rarely do you get the opportunity to see what happens with the leader of the team in this type of series. It appears that Julie is making it a point for us to get to know everyone involved. In addition, there is a lot of intense action in this book. Search & Destroy is by far the best one yet. I don’t want to give too much away so I will just say that we really learn a lot more about the terrorists in this book than we had before.

Full-time author, freelance writer and workshop facilitator, Julie Rowe’s debut novel, Icebound, was released by Carina Press on Nov 14, 2011. Ten novels and eight anthologies have followed. Her most recent titles are the MEN OF ACTION boxed set and VIRAL JUSTICE book #3 of the Biological Response Team series. Julie’s articles and short stories have appeared in numerous magazines, such as Romantic Times Magazine, Today's Parent magazine and Canadian Living. Julie facilitates business writing and communication workshops at Keyano College in her home city, and has presented writing workshops at conferences in the United States and Canada. She’s also a strong supporter of life long learning and moderates a free announcement loop for the promotion of online classes, workshops and webinars.