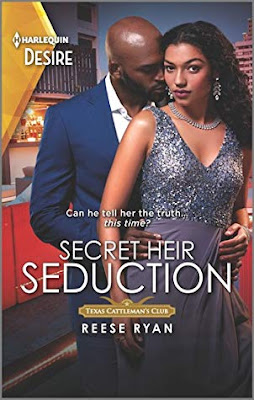 Can he tell her the truth… this time?

Will he risk everything for a reunion? Will she give him the chance?

Discovering he’s a long-lost heir isn’t the only surprise awaiting Darius Taylor-Pratt in Royal, Texas. He’s next door to his ex after five long years. Darius broke off his red-hot relationship with designer Audra Covington without explanation. He still has regrets…and truths he’s hiding. Rekindling their flame may cost him…especially when new secrets surface to threaten their second shot at seduction.

Reese Ryan is one of the authors who has made me a fan of Harlequin Desire books. I honestly see her name and don't bother to read the blurb. That is definitely what happened with Secret Heir Seduction, the fourth book in the Texas Cattleman's Club: Inheritance series. Having read all the previous books in the series, I don't think you have to read them all to understand what’s happening, but I do recommend reading the first book, Tempting the Texan by Maureen Child. Tempting the Texan sets up the series, introducing you to the characters and establishes the series conflict and mystery.

The Inheritance series revolves around the children of Buck Blackwood and their quest to contest their father's will after he dies and leaves his vast billion-dollar fortune to his younger ex-wife Miranda Dupree. In death, Buck not only seems to continue to disregard his children but leaves his attorney, Kace LeBlanc, to inform his “loved ones” that he also has a child who was the result of an affair while he was married to his children's mother. Miranda is tasked with finding Darius Taylor-Pratt, Buck’s biracial son he fathered with actress Liberty Taylor. To get Darius to come to Royal, Texas, Miranda tells Darius that she would like to collaborate with him, in designing an activewear line for her Goddess, Inc. company.

For the past five years, Darius has been working tirelessly to create and build his activewear company, Th3rd. Partnering with Miranda and Goddess is an opportunity Darius can't possibly pass up, even on the eve of the company's first fashion show. While Darius has given up any hope of finding out who his biological father is, he's more than surprised to learn that all the financial struggles he’s endured could have been avoided if Buck would have acknowledged him in life. Miranda convinces Darius to stay in Royal for a while to get to know the place. She even sets him up with his own house. Darius is shocked to run into his ex-girlfriend, Audra Covington, who is in town to design jewelry for his new half-sister Sophie's upcoming wedding. He's even more shocked and a little excited to discover Audra is renting the house next to his.

Five years ago, Darius broke Audra’s heart when he walked away from her with no explanation given. While Darius loved Audra more than anything, he didn't feel his love was enough for Audra, who's a diamond heiress from a rich political family. While Audra has gone on with her life, she hasn't forgotten about Darius and the way he made her feel.

I’m a huge fan of second chance romances. The characters already know each other, they have a shared history, at least one of them carries a little animosity, and just below the surface, there is still passion burning hot, waiting to explode. And passion explosion is exactly what happened between Audra and Darius. I loved watching these two together. Their back and forth banter made for an enjoyable read. Their stripped down raw honesty with themselves and each other is what captured my heart. “No matter how hard I try to push you out of my head...you’re always there.” “Whatever it is you’re feeling, just...feel it. Don’t pretend the feelings aren’t there.”

From the beginning of the series, reality TV personality Lulu Shepherd and Kace LeBlanc captured my attention. I was over the moon to finally have their relationship discussed and written about. I love that readers continue to see Miranda in a different light from what the Blackwood children view her as. As with From Boardroom to Bedroom by Jules Bennett, I'm not sure if any headway was made into figuring out the mystery of Buck’s will. I just know that I loved all the characters and the way Secret Heir Seduction was written and played out. There's a secondary, secondary character named Tripp Noble that I need a story on. As for the rest of the Inheritance series, I am definitely looking forward to seeing how everything turns out.

“Belief can be a powerful thing.”

“Family is a complicated thing.”

“Darius Taylor-Pratt was her personal Kryptonite.”

📖 You can read an excerpt of Secret Heir Seduction here. 📖 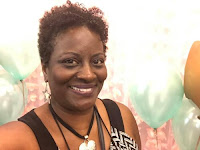 A Midwesterner with deep Southern roots, Reese currently resides in semi-small-town North Carolina where she’s an avid reader, a music junkie, and a self-declared connoisseur of cheesy grits.