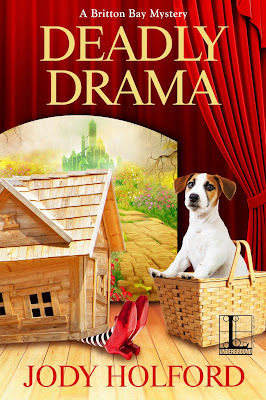 Living in the beautiful coastal town of Britton Bay, Oregon, seems like the perfect fit for Molly. She enjoys her work as editor-in-chief of the Britton Bay Bulletin, loves her boyfriend Sam, and feels at home in the adorable cottage in the back of his mother's bed and breakfast.

This spring Britton Bay is staging its first-ever community theater production. The show—featuring local residents—is the talk of the town, but tongues are really wagging over the director. But former soap opera actress Magnolia Sweet is anything but; nothing's worse than a has-been on a power trip, and steely Magnolia chews out her amateur cast like she used to chew scenery.

Still, it's a shock to all when she's found murdered in the theater. Now it's open call for suspects, as Molly steps in to direct and shine a spotlight on a killer waiting in the wings. But will this be her final act?

“I did not see that coming.” When rude, demanding, and outright mean theater director Magnolia Sweet dies a la Wicked Witch of the West style and one of Britton Bay's likeable and loveable citizens is arrested for the murder, newspaper editor Molly Owens calls on her sleuthing skills to catch the true culprit. But Molly's dogged determination to find the true killer lands her on the killer's watch list and puts not only herself but someone close to her in jeopardy. Sit back and relax, because Jody Holford's Deadly Drama is going to have you on the edge of your seat, before the last curtain call.

“Sometimes we think we know a person, but maybe we never really do.”

“Sometimes you can show the greatest strength by asking for help.”

I’m a mom and wife first and many things after. I’m a best friend and a regular friend. A daughter, sister, auntie, and a teacher. I am a book lover, a shopper, a pajama-wearer, movie-watcher, worrier, over-thinker, and a wanna-be-good-Samaritan. I’m a Gemini, a nervous talker, and an emotional writer. I am represented by Frances Black of Literary Counsel.