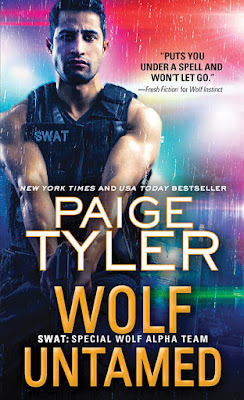 The guys in the Special Wolf Alpha Team (SWAT) are hotter than ever.

SWAT werewolf Diego Martinez was on a mission to save lives when he walked into the hostage situation—he didn’t expect to find a newly turned teenage werewolf and the kid’s fiercely protective mother. For Bree Harlow and her son, Brandon, Diego is a godsend, and not just because he saved the day.

Bree has spent the years since her divorce trying to do her best by Brandon. But lately the boy who used to tell her everything has been keeping secrets. In the face of all the bizarre things happening at home, there’s something about Diego that Bree can’t resist—especially when he’s able to explain Brandon’s new abilities.

But the hostage incident was just the start in a wave of violence that no one can explain, and when Bree and Brandon are caught in the middle, Diego will do everything in his power to protect the family he wants as his own.

Wolf Untamed is the latest book in Paige Tyler’s SWAT: Special Wolf Alpha Team Series. Just like all of the other books in the series, Paige continues to come up with new material that you just don’t see coming. You would think that at this point she would run out of good stories to tell about this dynamic team of werewolves.

This time, the story is about Dallas SWAT team member Diego Martinez and Bree Harlow who is “The One” for Diego. Paige throws in Bree’s teenage son who has no idea that he is a werewolf. I would have thought that would have been enough to keep things interesting but there are other more bizarre things going on that I couldn’t explain if I tried. Of course, you will have to read the book to figure that out for yourself. Diego and Bree have the usual chemistry and scorching hot bedroom antics. But we also get to see Diego display a fatherly side of himself that he didn’t know he had considering the fact that his father left the family when he was younger. Unlike the other books in this series, I felt like Wolf Untamed had a different familial element to it which made it more meaningful. It was very deep and unpredictable. There is also plenty of action.

I love this series and can’t wait to read the next book, Rogue Wolf. I can only imagine what direction Paige takes the team next. Either way, I know that I won’t be disappointed.