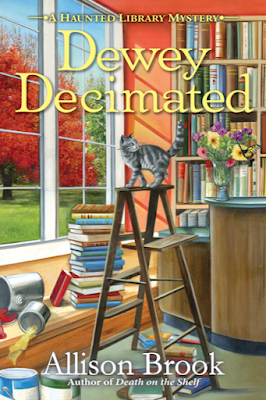 Librarian Carrie Singleton is back on the case, alongside library ghost Evelyn, in the sixth installment of Agatha Award nominee Allison Brook’s Haunted Library mysteries.

Carrie Singleton is just off a hot string of murder cases centered around the spooky local library in Clover Ridge, Connecticut. She could really use a break—but no such luck, as she; Smokey Joe, the resident cat; and Evelyn, the library’s ghost, are drawn into another tantalizing whodunit.

First, a dead body is found in the basement of the building attached to the library, and it turns out to be Carrie’s fiancé’s Uncle Alec, who Dylan hasn’t seen in years. But Alec has no intention of truly checking out, and his ghost makes itself at home in the library, greatly upsetting the patrons. Carrie and Evelyn work hard to keep Alec out of sight, but what was he doing in Clover Ridge to begin with? And why was he killed?

Meanwhile, the town council, of which Carrie is also a member, is embroiled in a hot-headed debate over the fate of the Seabrook Preserve, a lovely and valuable piece of property that runs along Long Island Sound. Turn it into an upscale park? Sell it to a condo developer? Or keep it as protected land?

As the dispute rages, there’s another murder, this time involving a council member. Could the two murders be connected? And could Carrie be next on the hit list?

Hi Carrie. Welcome back to Read Your Writes Book Reviews. How are you doing?
Thank you. It's a pleasure to visit you again. I'm doing fine. I'm still working as head of programs and events at the Clover Ridge Library in Clover Ridge, Connecticut. My life is busy and full.

That’s good. It’s been a while since I caught up with you and all the things happening in your life and the town of Clover Ridge, Connecticut. What has been going on since Buried in the Stacks?
Things have been hectic. All good things except for the occasional murder. My mother and her husband Tom were in town in Checked Out for Murder because Tom was starring in a movie being filmed here. They had many problems, both personal and murder-wise, that I helped resolve. My best friend Angela got married in Death on the Shelf —so much family drama!—and I joined the town council. Lots of activities, adventures, and murders to solve.

Congratulations on getting engaged to Dylan. I love proposals, can you please tell me who proposed and how?
Thank you! Yes, Dylan and I are now engaged. Dylan proposed to me in the most romantic way. It took me completely by surprise because I had just helped the police solve two murders. I had gotten myself in a ticklish position and could have gotten seriously hurt or even killed . . . but you want to know about Dylan's proposal.

As I said, I was recovering from a very exciting day when Dylan reminded me that he was bringing in dinner. Oddly enough, he wanted us to eat in the manor house, as I think of the large house his parents lived in. Very stuffy and formal. We rarely spend time there. Well, he'd set up the meal in the dining room, with candles and flowers and good China.

It was like a dream. First, he served oysters, then my favorite summer dish: lobster roll. I was in heaven. Dylan said we'd have to wait for dessert. He came to stand before me, got on one knee and declared his love, then asked me to marry him!

I was totally shocked. I'm afraid I didn't give him quite the answer he expected when I said I loved him but I had to get used to the idea of getting married. I was nervous when I told him I didn't want to live in that stuffy, formal house. To my relief, Dylan said he didn't either. After that, I said yes!

And so we're engaged and I'm about to marry the most wonderful man in the world.

That was an interesting proposal. Congratulations again. Speaking of Dylan, your latest murder mystery has something to do with him. Can you please tell readers and me about some of the events transpiring in Dewey Decimated?
Dylan is very fond of my great aunt and uncle. He has a wonderful relationship with my father. I've been concerned that Dylan never talked much about his parents. When he finally told me what they were like, I understood why. His parents never gave him much attention; they were too busy making money. In fact, he often visited Great-aunt Harriet and Great-uncle Bosco on the Singleton Farm, even when my brother and I weren't visiting there during summers.

In Dewey Decimated the building next door to the library is under construction and being transformed into the library's new wing. A body is discovered in the basement, and when the workmen break through the adjoining wall, the ghost of the dead man enters the library, creating havoc among the patrons. He has no idea who he is or how he got there.

The ghost, it turns out, is Dylan's Uncle Alec. Evelyn, my ghost pal, and I have a hard time keeping Alec hidden so he won't disturb the patrons while we discover who murdered him. At first, Dylan doesn't want to have anything to do with his uncle because Alec disappointed him so often. What's more, Alec has done many disreputable things in his life. But he came to Clover Ridge with good intentions. And so Dylan has to decide if he's willing to make peace with Alec before he goes to his rest.

That’s a lot and interesting. Tell me how library ghost Evelyn and your cat Smoky Joe help you solve murders.
Evelyn knows many of the people in town and gives me valuable background information about people involved in murders, especially the cold cases. Smoky Joe is also the library cat. In Read and Gone he finds a bag of valuable gems that many people are searching for.

What’s next for you Carrie?
Dylan and I have to find a venue for our wedding, but something is always coming up that requires our attention. Dylan's uncle has left him a valuable painting, leading to all kinds of complications.

Thank you for taking time out of your busy schedule to catch me.
Thank you! 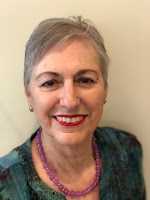 A former Spanish teacher, Marilyn Levinson writes mysteries, romantic suspense, and novels for kids. Her books have received many accolades. As Allison Brook, she writes the Haunted Library series. DEATH OVERDUE, the first in the series, was an Agatha nominee for Best Contemporary Novel in 2018. Other mysteries include the Golden Age of Mystery Book Club series and the Twin Lakes series.

Marilyn lives on Long Island, where many of her books take place. She loves traveling, reading, doing crossword puzzles and Sudoku, and chatting on FaceTime with her grandkids.