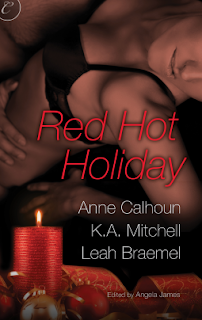 Welcome to the holidays....Red Hot Holiday is an anthology that has something for everyone, with stories from K.A. Mitchell, Leah Braemel, and Anne Calhoun.

I'm a romance girl, no doubt about it. However these three ladies are all new to me and thus I had no idea what to expect. With a title called Red Hot Holiday, I should have known a little bit of what I was getting myself into. Red Hot Holiday is definitely a hot book.

There’s so much Jonah Kendrick hasn’t tried, and so much he wants to explore.  But just before Christmas he finds a ring box in his boyfriend’s desk.  Jonah panics. He loves Evan and their sex is hot, but how can Jonah be ready for forever when there are so many items on his Naughty Bucket List?  Desires that might drive Evan away.

Evan’s noticed Jonah has been distant. His usually talkative and cheerful boyfriend is preoccupied.  The seemingly straitlaced Evan stumbles across Jonah’s wish list of sexual kinks, and Evan realizes he may not have to hide his true nature from Jonah after all.  The Dom in him wants to see Jonah on his knees, begging, submitting, but Evan isn’t sure Jonah’s ready to accept what being Evan’s sub would mean.

The two lovers must figure out how to share their hidden desires with each other before their secrets permanently damage their love.

This is the first book by K.A Mitchell I've read and it's also the first M/M I've read.  I have to say I'm looking forward to reading more of each.  With that in mind, I will say the Dom/Sub aspect of the book was a little too much for me.

Since M/M is a new area for me, I didn’t know what to expect.  After I got the guys right in my mind, it was an easy book to follow and understand.  I loved the characters of Evan and Jonah, even if there were times when Jonah got on my nerves.  I was completely blown away by how HOT this book was.

The book overview does a really good job of summing the book up.  Jonah accidentally comes across a box containing wedding rings and he automatically thinks Evan is getting ready to propose to him.  I mean really, who wouldn’t think that?  Jonah and Evan have been together for two years.  Me personally, two years and I need a ring and a lifetime commitment.  I understand why Jonah freaked out.  A lifetime is a really LONG time to be with someone and you want to make sure you’re making the right decision.  But instead of talking to Evan, Jonah decides to make a so-called bucket list of things he wants done in the bedroom, and of course he writes it on a piece of paper.  Hey, nothing can go wrong with having something like that on a piece of paper now can it?  Right.

Evan is the guy everyone wants.  He’s not pushy or overbearing, he’s patient.  He constantly asks Jonah what he wants or what he needs, if everything is okay.  Evan finds the paper Jonah wrote his list on.  He wonders why Jonah just doesn’t tell him what he needs to be fulfilled.  Evan gives Jonah plenty of opportunities to tell him, Jonah just doesn’t.  I mean who isn’t going to love a guy like that and want to spend eternity with them?

I loved the way Evan guides Jonah towards fulfilling Jonah’s dreams/fantasies and his own.  The book boils down to the guys needing to trust each other and to being open and honest with each other.


I Need You for Christmas by Leah Braemel

Ryan Porter is a sculptor, and beneath his callused hands, even the most rigid metals bend to his will.  So, too, does his girlfriend Megan--a confident, strong woman who delights in submitting to Ryan’s dominance in the bedroom.

Megan is a Mountie, and she’s spent the past few years in the Arctic following her career dreams.  Family obligations kept Ryan at home, but their love survived the distance thanks to several hot visits.  A Mountie always gets her man, and Megan is bound and determined to keep Ryan.

Now Megan’s with Ryan for the holidays...but how long will this visit last?  She’s always been willing to do anything Ryan desires, but will he finally tell her that all he needs for Christmas is her?

This was without a doubt my favorite book of the anthology.  You can feel the love Ryan and Megan have for each other.

Quick setup, Ryan and Megan met when Ryan’s brother Derek started dating Megan’s college roommate Amy.  Ryan and Megan pretty much had their life together planned out until a horrible car accident changed their lives.  Ryan’s father and stepmother were killed in a car accident and Ryan at the age of twenty-two, was left to be the guardian of his two brothers and sister.  Ryan knows what it’s like to have your dreams taken away from you.  He knows Megan’s dream has been and is to be a Mountie, thus he can’t ask her to give that up just to be with him.

Now seven years later, he’s finally ready and able to live his own life.  Remarkably, all of this time, Ryan and Megan were able to keep their love for each other alive, even though they were far apart.  Now this Christmas, they each plan on giving the other the best Christmas gift ever, themselves.  No more lonely nights.  No more a week here or there, when they have the time.  How romantic is that?  Did I mention neither one has told the other about their plans?

I really loved both the main characters and most of their supporting cast.  This was one of those books where I wasn’t yelling at either the hero or the heroine to get their acts together.  Well, maybe I was just a little bit.

Did I mention that this book was HOT?  I know I’ve said this already, but I really loved Ryan and Megan.  I love the fact that they are each willing to give up their dream to be with the one person they love the most.  What could be better than that?

Breath on Embers by Anne Calhoun

Christmas is the perfect time for firefighter Ronan O’Rourke to take things to the next level with his sexually adventurous girlfriend.  He knows she has feelings for him--and he’s sure of his feelings for her--but when Thea refuses his invitation to sample Christmas in New York City because what they share is nothing more than sheet-burning sex, Ronan sets out to change her mind.

Deep down Thea Moretti knows she cares for Ronan, but she can’t move past her grief over her late husband.  Loud music and sex with Ronan are the only things she’s got that make her feel alive, so she takes as much of both as she can get.  She knows Ronan wants more, but during the darkest time of the year finding her way won’t be easy.

Ronan gambles everything and challenges Thea: one night of passion with him and another man.  Can he prove to her that what they share isn’t just great sex but an emotional connection strong enough to last forever?

Thea and Ronan are two very likeable characters.  I fell for them both immediately.  Thea is pretty much "dead" to the world because her husband was killed in a car accident shortly after Thanksgiving two years ago.  Thea and her late husband Jesse loved the Christmas holidays.  Christmas was a big thing for them and both of their large families.  Ronan is a firefighter who has the classic “rescuer’s syndrome”.  He lost his uncle, who he was extremely close to, on 9/11 and his best friend, a fellow firefighter, three years ago during a building collapse.

Thea’s family, including her in-laws have absolutely no idea how hard the death of her husband has been for her.  No one understands how hard it is for her to deal with Christmas and the holiday season while she has to watch them go on with their happy lives.  They are constantly pushing for her to move back to the city where her hopes, dreams, and pretty much her whole world came to an end.

Ronan knows Thea is using him to avoid dealing with her issues and problems.  To a certain extent he is or was okay with that, but not any more.  Now he wants more.  He thinks they both deserve more.

Thea and Ronan are two people who need each other.  They met almost two years after Ronan lost his best friend and he is coming out of his own fog, ready to start living again.  Thea made Ronan feel alive for the first time in years.  She needs Ronan to teach her how to live and love again, without all of the darkness surrounding her.

My favorite quote from the book isn’t romantic or heated, but it’s truthful.  “The second year of grieving.  It’s harder than the first.  Everyone remembers the first anniversary without a husband or the first Thanksgiving without a father.  By the time the second one comes around, you’re supposed to be over it.  Everyone else is, but you’re not.  So it’s harder.  Lonelier.”

Oh silly me...I forgot about about the other man, not really.  He’s 6’5” how could you possibly forget him?  Tim Cannon is Ronan’s good friend and fellow rescuer.  Yeah, he seems like a jerk at first, but he really isn’t.  It’s all just an act he puts on. Unbeknownst to Thea, Tim helps to provide the start of the turning point in her life.  Because of him, he realizes what Ronan means to her.

I am definitely looking forward to reading more from Anne in the future.