Review ~ TOO TEXAN TO TAME by Janice Maynard 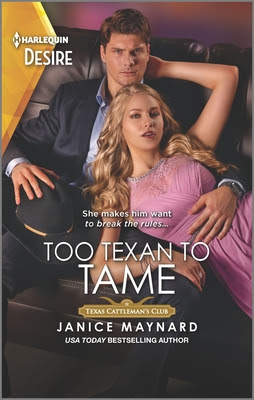 She makes him want
to break the rules...

Rancher Vaughn Blackwood is only back home in Royal, Texas, for his sister's wedding. Then he runs into Brielle Gunderson--and learns he's the father of her baby. A fake engagement would secure his newfound daughter's claim to the Blackwood legacy. But Brie has doubts about the plan even as their passion reignites. Can Vaughn change...or will Brie become the girl who got away--twice?

Too Texan to Tame by Janice Maynard is the fifth book in the Texas Cattleman’s Club: Inheritance series. Surprisingly, I found the story to be a standalone read. This is a second chance romance, with a surprise baby twist.

Too Texan to Tame was a book I really wanted to read. Over the course of the previous four books, Vaughn Blackwood has made appearances or has been mentioned. Up until now, readers haven’t been granted access to who he really is. The premise of the Inheritance series is that the children of Buck Blackwood are upset that he left his vast billion-dollar fortune to his younger ex-wife Miranda Dupree and nothing to them. The children weren’t close to their father and equally shared no love for his ex-wife. However, that doesn’t justify them being left out and her getting every single penny. While his brothers and sister have chosen to contest the will, Vaughn could care less. His view is that his father didn’t give him anything in his life, so he doesn’t what anything from him in his death.

As the second oldest child, Vaughn has built a vast empire in Fort Worth and around Texas. While he was born and raised in Royal, he doesn’t consider it to be home. In fact, he tries to avoid the place as much as he can. But with his sister Sophie getting married, he finds himself back in the last place he doesn’t want to be, Royal, Texas.

Brie Gunderson has recently moved back to Royal. With the help of her parents, she’s opened the Happy Trails Vet Clinic. Brie loves being a vet, but she also loves being a mother to her almost-two-year-old daughter, Danika. With Vaughn back in town for a while, Brie feels it’s finally time to tell him about his daughter. Brie knows Vaughn isn’t the settling down, white picket fence, kids fulfilling his life type. After all, that’s why she ended their relationship. Brie doesn’t want money from him, she’s not even expecting Vaughn to be in Danika’s life. She just wants him to know he has a daughter in this world.

As surprise baby storylines go, I really liked the way Janice wrote the story. The reveal was fast. The reason for the secret was clear and believable. I was surprised to find that Vaughn was a character I was conflicted about. He’s emotionally stunted and at times seemed to want to be the victim. One thing I never questioned was the way he felt about Brie. He’s not a man who uses the “l” word, but you can tell that he loves her, even if he doesn’t always show it. The passion between Brie and Vaughn is definitely there. I really like the interactions between Vaughn and Danika. While I would have thought this would be a predictable story, there were moments I didn’t see coming.

My issues with the book are more about what I presumed to be guidelines set forth by the publisher, as opposed to the author’s writing. Kace LeBlanc (Buck’s attorney) and Lulu Shepard (a reality star on Secret Lives of NYC Ex-Wives and a co-star of Miranda’s) were introduced in the first book, Tempting the Texan. You definitely knew there were sparks between these two. I’m disappointed that their romance was off the pages, as opposed to having each author write about their relationship using dual storylines. I wasn’t crazy about how their relationship climaxed. The series has been about the secrets of Buck’s will. I was surprised that was resolved when there’s still one more book in the series. Without saying what happened, I’m a little confused by something Miranda did. While I’m sure the issue will be addressed and resolved in her story, Her Texas Renegade, the problem doesn’t seem to be Miranda’s to deal with. With that said, I’m very curious to read Her Texas Renegade to find out more about Miranda and her past and if there is, in fact, a plot twist to everything that’s happened.

“Don’t be afraid to change.”

“It’s okay to love people, Vaughn, even when they disappoint us.”

“Love isn’t love if you’re always trying to change someone.”

“Life is always about timing.”

“Some things in life are more important than money.”

“‘I’m the slowest man on the planet, but I can be taught, I swear.”

Janice Maynard knew she loved books and writing by the time she was eight years old. But it took multiple rejections and many years of trying before she sold her first three novels.

After teaching kindergarten and second grade for a number of years, Janice took a leap of faith and quit her day job. Since then she has written and sold over forty-five books and novellas. Her publishers include Harlequin, Kensington, Penguin, and Berkley.

Janice lives in east Tennessee with her husband, Charles. They love hiking, traveling, and spending time with family.