Review ~ DEATH WITH A DARK RED ROSE by Julia Buckley 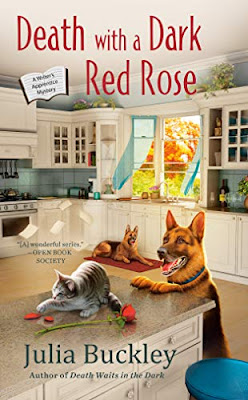 Writer's apprentice Lena London is enjoying life in Blue Lake and being newly engaged, but is soon drawn into the terrifying disappearance of one of her closest friends....

Lena is starting to feel like having it all may actually be possible! She and suspense novelist Camilla Graham are busily plotting their next novel and she's got a brand-new diamond ring on her finger thanks to her fiancé, Sam West. The only blot on her Blue Lake life is a strange new corporation that has come to town called Plastisource. They seem to be intent on gobbling up prime real estate and changing the landscape of Lena's lovely adopted home.

When she and Sam get a call from their good friend (and Blue Lake detective) Doug saying that his girlfriend--and Lena's pal Belinda--isn't answering her phone and missed a date with him, they all head out to her home. The trio is shocked to discover that Belinda's purse and phone are at her house, along with a single red rose on her countertop--but Belinda herself is missing. Has she been abucted? Could the strange new corporation play a role in her disappearance? Lena is determined to find out and rescue her friend because she knows that the truth can be stranger and much more deadly than fiction....

Death with a Dark Red Rose is the fifth and final book in Julia Buckley’s A Writer’s Apprentice Mystery series. Throughout the series, readers have been introduced to Lena London, who has gotten to live every reader’s dream of meeting their favorite author, being their apprentice, writing books as a duo, and even sharing a house with them. Lena has also had her fair share of drama, mysteries, and murders to solve. Since moving to Blue Lake, Indiana Lena has reconnected with a childhood friend, met the love of her life, Sam West, and made several new friends. Death with a Dark Red Rose finds Lena’s friend Belinda missing, which sets off an unforeseeable series of events. “Oh, Lena, what have you stumbled upon this time?”

Blue Lake is known for its friendly people and appreciation of the environment. In fact, it’s been said that the water in Blue Lake is the best drinking water around. The open space found in Blue Lake has attracted the attention of a corporation called Plasti-Source. However, it’s tall, dark, and dreary looking building doesn’t match the aesthetics of Blue Lake. Could the new building currently being constructed be a sign of what’s to come? Lena and her friends, affectionately known as the “Scooby-Doo gang” are on the case.

Death with a Dark Red Rose was an incredible mystery. Julia has put in surprises, twists, and turns. For the romance lover in me, she made this book truly about love. Sadly, this is the last book in the series. However, Julia wrapped things up nicely.

“Sometimes you can come through adversity and find life even better on the other side.”

You can read my interview with Julia, discussing the series here.