#BookReview ~ HELL & BACK by Julie Rowe 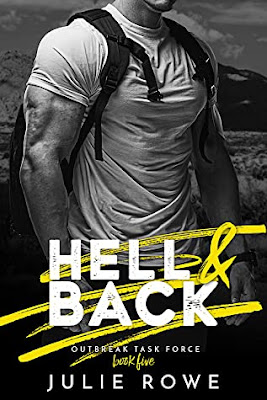 Racing to lock down the CDC's deadly virus samples from terrorists, ex-Special Forces medic Henry Lee partners with Ruby Toth on the Outbreak Task Force. But the terrorists always seem one step ahead. As they work side by side, Henry's taken with how Ruby accepts and respects him, instead of pitying him for all he lost overseas, including his leg. Ruby's hiding something, though, and Henry fears she's been leaking sensitive information.

Terrorists have kidnapped her brother, and now microbiologist Ruby Toth faces a horrible choice. If she doesn't give them a vial of Small Pox as ransom, her brother will die. She knows her prickly—yet very hot—boss, Henry, could provide the help she needs. But she joined the CDC to root out insiders plotting to unleash a bio-engineered pandemic, and she can't trust anyone. Not even Henry.

Hell & Back is the fifth and final book in Julie Rowe’s Outbreak Task Force series. There is so much that happens in the previous books that feed into this one, I don’t see how you can really enjoy this one without having read the others. All of the previous characters are mentioned in Hell & Back which makes it that much more enjoyable to read. Considering where we are as a world due to the coronavirus, this book is more timely than I am sure the author could have ever imagined.

As with the previous books, Hell & Back focuses on two individuals who are members of the Outbreak Task Force which is part of the Centers for Disease Control. Henry Lee is a Senior Lab Tech who has played a pivotal role in trying to stop the terrorist group known as the FAFO from releasing different biological agents to kill Americans. Ruby Toth is also a lab tech who has been working alongside him but she has her own agenda that no one inside the CDC is aware of. Henry is also her mentor and secret crush. New and direct attacks on the CDC and its Task Force put Ruby and Henry in closer proximity than either of their hearts can handle. Of course, this leads to some very steamy action between the sheets and creates some awkward moments. Needless to say, there is a lot of action and explosives between hero and heroine as well as the Task Force and the FAFO. Everything happens really fast. There is nothing held back which makes Hell & Back such a fun read.

I really enjoyed the closure provided in Hell & Back and all of the characters seem to have received a fitting farewell. There were a lot of loose ends to tie up which I believe was done very well. I really loved this series and would love to say more but I don’t want to ruin it. I will just say that I felt this fifth and final book was necessary to wrap everything up in a nice bow. Henry and Ruby worked well together. More importantly, the Outbreak Task Force series really showed every woman as an equal to the man they fell in love with. They all fought as a team and there was never a time where the women were treated as weaker or less empowered. Kudos to Julie for creating a very intricate and believable world within this Task Force. I look forward to reading other books by her.

**Received a copy of the book from the publisher and reviewed it voluntarily.**

Julie Rowe’s first career as a medical lab technologist in Canada took her to the North West Territories and northern Alberta, where she still resides. She loves to include medical details in her romance novels, but admits she’ll never be able to write about all her medical experiences because, “No one would believe them!” She currently facilitates communication workshops for her local city college. Julie enjoys hearing from her readers.