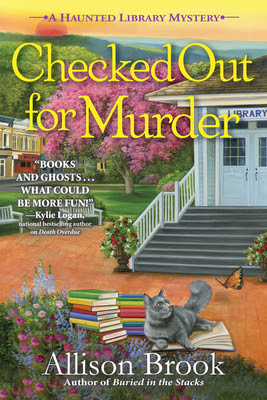 Carrie Singleton and Evelyn the ghost sleuth the slayings of a starlet and a star-crossed psychic in Agatha Award nominee Allison Brook's fourth Haunted Library mystery.

Daphne Marriott strolls into Clover Ridge and informs librarian Carrie Singleton that she's a psychic. But had she foreseen what fate awaited her, Daphne would have steered clear of the quaint Connecticut town. Evelyn, the library ghost, tells Carrie that there's more to Daphne than she lets on.

The mysterious woman grew up in Clover Ridge with her no-good dad, who apparently met his end at the hands of Daphne's brother, Billy. Still, Daphne proves a welcome distraction when Carrie's overbearing mother hits town. Mom's much younger husband, Tom, is in a movie that's lensing locally, and she's there to keep an eye on him: Tom's costar, sultry Ilana Reingold, is also his ex-fiancée, and there's no denying the chemistry is still there. Soon after mingling with the moviemakers at a meet-and-greet, Daphne is found dead.

Carrie and Evelyn investigate, assisted by bushy-tailed library cat Smoky Joe. But the suspect list could overflow the library shelves. Has Billy killed another relative? Is their long-missing mother involved? Or Daphne's mean ex-husband? Carrie's sure she knows who committed the crime, but can she bind together the clues before the culprit Dewey-decimates the town?

Hi Allison. Welcome back to Read Your Writes Book Reviews. How are you?
Thank you for inviting me back. I'm fine, thank you.

Checked Out for Murder is the fourth book in your Haunted Library Mystery series. What can readers expect from it?
Ah! This book has a good deal of intrigue and adventure. Carrie's mother, with whom she doesn't get along very well, comes to Clover Ridge because her husband Tom has a role in the movie being filmed in town. Tom's playing opposite his former fiancee, who plays up to him and well . . . there are repercussions. Meanwhile, Carrie befriends a young woman with psychic abilities and secrets. There are new murders, a cold case to be solved, and mysteries galore.

Carrie Singleton and her boyfriend Dylan Avery have been dating for a while now. I love it when there’s romance in cozy mysteries. Do you think their relationship will progress further?
Carrie and Dylan are getting along nicely in Checked Out for Murder. Carrie's best friend Angela is getting married very soon, which forces Carrie to think about the M-word, even though it frightens her.

I’m really excited to hear that. I think. Fingers crossed it’s all good. What’s your favorite part about writing a cozy mystery?
The characters! I love my characters—how they relate to one another. I love seeing how Carrie has developed from an unhappy young woman to one with loving friendships and a sense of responsibility and community.

What’s the hardest part for you when it comes to writing a cozy mystery?
Can you believe—the transitions from one major event to another? I even blogged about this on Writers Who Kill, my group blog. It's important to have a logical and interesting transition from one scene to another.

Who’s your favorite character of the series and why?
I love Carrie, of course, as she's my sleuth, and I'm especially fond of Evelyn Havers, the library ghost who helps Carrie solve mysteries. Evelyn is an elusive character because she comes and goes and won't discuss her whereabouts when she's not in the library. Also, she holds back information from Carrie when a case involves one of her relatives—which is often the case. Each book reveals more and more about Evelyn's past life, including the details of her death.

I thought your last book, Buried in the Stacks, really put a big spotlight on Evelyn’s life before she died. I’m really happy she’s still around. What does the future hold for you and Carrie?
I'm writing the fifth book in the series that I call A Deadly Event since something deadly happens at Angela and Steve's wedding. Also, the mayor wants Carrie to come on the town council, though she's not sure she wants to take this on. I hope to write as many more books about Carrie and the Haunted Library series as my publisher wants me to write.

Oh. A Deadly Event sounds really intriguing. Good luck with the writing. I definitely hope this series continues. Allison, thank you for taking the time to answer some questions for me.
Thank you for having me. 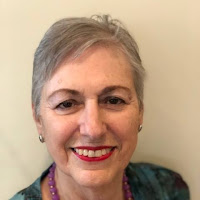 A former Spanish teacher, Marilyn Levinson writes mysteries, romantic suspense, and novels for kids. Her books have received many accolades. As Allison Brook she writes the Haunted Library series. DEATH OVERDUE, the first in the series, was an Agatha nominee for Best Contemporary Novel in 2018. Other mysteries include the Golden Age of Mystery Book Club series and the Twin Lakes series.