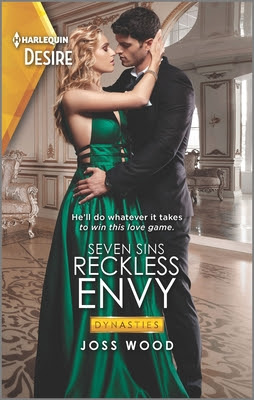 He’ll do whatever it takes
to win this love game.

The woman he craves is engaged to the man he loathes.

But that’s not stopping him…

Matt Velez has everything a man could want: money, success and his pick of gorgeous women. Well, almost everything. The affections of tantalizingly sexy good girl Emily Arnott remain strictly off-limits—because she’s engaged to Matt’s bitterest rival. Will jealousy consume him…or does Emily hold the secret key to set them both free?

Fifteen years ago, investment fund manager Vernon Lowell stole millions from his family and clients and disappeared. The Dynasties: Seven Sins series chronicles seven heirs showcasing what they went through as teenagers, as a result of their families losing their fortunes, and who they are today.

Reckless Envy is the fifth book in the series and Joss Wood did a wonderful job of catching readers up on what has happened in the previous books, thus making this a standalone read.

In Ruthless Pride written by Naima Simone, Joshua Lowell found love and decided to follow his true passion. This meant stepping down as CEO and leaving Black Crescent Hedge Fund, the company his father founded and stole from. Matt Velez was once Falling Brook’s resident bad boy. After single handedly turning his life around, he is now CEO of Manhattan-based MJR Investing. Matt is one of three candidates seeking to become the new CEO of Black Crescent. After the Black Crescent scandal, Emily Arnott’s mother left the family, causing her father to become distant and lose himself to depression. He put all of his time and energy into rebuilding his own investment firm and had nothing to give to his children. At a young age, Emily had to assume adult responsibilities and look after herself and her older brother who has special needs, all the while pretending she was fine.

Emily has the appearance of an angel, and her actions lead her to have the reputation of being Falling Brook’s golden girl. Six years ago, at the age of twenty-one, Emily wanted to get rid of the good girl image by going after Matt, who turned her down. Now the two cross paths and Matt realized his attraction to Emily hasn’t faded one bit. This time, Emily isn’t throwing herself at Matt’s feet. Matt soon discovers Emily is engaged to Nico Morris, his former business colleague, and archrival. Matt knows Emily is too good for the guy and he’s sure that something is off with their relationship.

I loved Matt and Emily, as well as the story of Reckless Envy. These two are very different people but have a lot in common. They are caring and passionate, but also loyal and protective. Each is afraid of what they feel for the other. Matt is a man who likes to be in control. Emily has a way of keeping him off balance. The banter between these two is fun to witness. It’s really hard to not root for them to end up together. I loved the ending. And speaking of endings...a major bombshell is dropped that I didn’t see coming.

~ Favorite Quotes ~
“We can’t move forward until we address the past.”

**Received a copy from the author and voluntarily reviewed it.  Also personally purchased a paperback copy.**

Joss Wood’s passion for putting black letters on a white screen is only matched by her love of books and traveling (especially to the wild places of Southern Africa) and, possibly, by her hatred of ironing and making school lunches.

She’s a wife, a mom to two teenagers and slave to two cats. After a career in local economic development, she now writes full time.