Review ~ IN BED WITH HIS RIVAL by Katherine Garbera 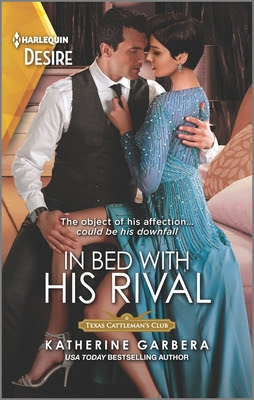 The object of his affection could be his downfall in this Texas Cattleman’s Club novel from USA TODAY bestselling author Katherine Garbera!

An older woman. A younger man.

An attraction these rivals can no longer resist.

High-powered attorney Brian Cooper has desired Piper Holloway for years. The successful gallery owner is confident, sexy—and on the other side in a legal fight between their families. But when the opportunity strikes, finally inviting Piper to his bed is nonnegotiable. When explosive secrets come to light, will their delicious but forbidden affair withstand the ultimate test?

In Bed with His Rival by Katherine Garbera is the sixth book in the Texas Cattleman’s Club: Rags to Riches series. I think theoretically the story is a standalone read. But technically in order to fully understand and appreciate some events of the story, you need to read at least the second book in the series, Black Sheep Heir written by Yvonne Lindsey. In Bed with His Rival marks a shift in the series. The previous books have all solely taken place in Royal, Texas. This story splits its time between Royal and Dallas.

In Bed with His Rival is an older woman, younger man, opposites attract romance. Piper Holloway is the forty-year-old younger sister of Ava Wingate, the matriarch of the Wingate family, and nineteen years older than Piper. Brian Cooper is eleven years younger than Piper and the nephew of Keith Cooper, a friend of Ava and her late husband Trent. Known as Uncle Keith to Ava’s child, he is someone they aren’t really fond of.

Family attorney Brian has been attracted to artist and gallery owner Piper for months. She doesn’t seem to notice him or share in the attraction. All of that changes at the wedding reception of Piper’s niece. When the two return to their homes in the Dallas Metroplex they embark on a wonderful romance. In fact, things are so good between them, they can’t help but wonder to themselves if it’s all real or if they are setting themselves up for heartbreak. Piper isn’t comfortable with their age difference or the fact that there are issues between their families.

This was my first older woman, younger man romance and I really enjoyed it. I loved getting to know Piper more and seeing her insecurities that she keeps hidden from everyone. Watching Brian deal with her feelings and his was nice to watch. I loved that even when he was struggling with his feelings for her, he was still steady and devoted. They really compliment each other and play off the other’s strengths and weaknesses. In Bed with His Rival drops a major bombshell, one I’m sure readers of this series have been expecting and waiting for. I will admit, I was surprised by how events played out. I’m definitely curious to see how the remaining books in the series will handle the fallout.

~ Favorite Quote ~
“Even a strong woman has vulnerabilities.”