The Advocate by Teresa Burrell 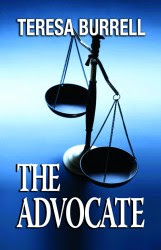 For Sabre Orin Brown, life is good; she has it all...or would have, if only she could solve the mysterious disappearance of her brother. The search for her brother and her career as a Juvenile Court Attorney collide when she defends a nine-year-old whose father will go to any length to obtain custody.
Sabre finds herself immersed in a case with too many unanswered questions. Her quest for the truth takes her coast to coast and five years into the past. Confronted with mysterious clues and strange occurrences, Sabre is threatened by someone wanting to make her suffer the unbearable anguish of losing everything--including her life.
As Sabre's passion to find the answers intensifies, she discovers a twisted history of desperation, deceit, and revenge. And she discovers how obscure and treacherous the truth can be.

Up until I read this book, I had never read a mystery/suspense novel before. I met Ms. Burrell at a Barnes and Noble and decided to buy her book and read it. I'm extremely happy I did.
The Advocate is the debut novel by Teresa Burrell, a former attorney and child advocate.
Surprisingly, for a mystery/suspense story, The Advocate is a little touching and emotional. You have heroes rising to the occasion and a couple of brave souls connecting the dots and making the ending possible.
Sabre Brown is a Juvenile Court Attorney for San Diego County, in San Diego, California. For Sabre, her day started out as any normal day would. Sabre and her friend and colleague, Bob Clark, are supposed to have an easy domestic violence case. Appearances are not always as they seem. What looks like a straight forward case turns into something so much more. The parties involved in the case include: Gaylord Murdock, a southern gentlemen from Atlanta, Georgia; Gaylord's pregnant girlfriend, Peggy Smith, Gaylord's ten-year-old daughter, Alexis; and Peggy's two-year-old son Jamie.
Gaylord Murdock was born and raised in Atlanta, Georgia, to a well respected, prominent family. He fell in love with and married Elizabeth Sterling. At some point during their marriage, the couple moved from Atlanta to Dallas. After a year and a half of living in Dallas, the couple moved back to Atlanta but still maintained contact with their Texas friends. One of those Texas friends happened to be Sabre's older brother Ron.
Five years ago, Elizabeth Murdock disappeared from her home in Atlanta. Around the same time, Ron disappeared from an airport in Dallas. His car was found but there was no trace of him. For Sabre, not knowing what happened to him stops her from having any closure. Strange events start occurring, making Sabre think about and long for her brother even more. Is it possible one day when Sabre least expects it, Ron will walk back into her life?
A simple interview with her ten-year-old client regarding the facts of the case produces more questions than answers. Seeking help, Sabre turns to Detective Joe Carriage of the Atlanta Police Department, who has an agenda of his own. One simple phone call and a few more seemingly mundane questions exposes illegal activity, deceit, revenge, and murder.
The Advocate is a page turner that will grab you from the beginning. Through the characters, you will experience shock, the courage and bravery of a small child, compassion, the will to survive, and a determination to find truth and justice.
I found The Advocate to be the perfect book for me to put my amateur sleuth hat on for. In fact, after I read this book, I immediately bought the second book in the series.
Rating: 4