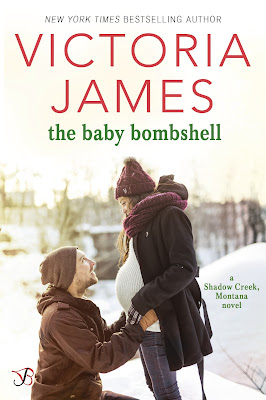 Lily Cookson has a few rules for the New Year, the most important being don't fall for Jack Bailey. The gorgeous, rugged man returned with a new look and a determination to win her back, catching her off guard. After a forbidden night in his arms, she vows never to let it happen again. But when morning sickness kicks in a few weeks later, Lily realizes staying away from Jack just got a whole lot harder.
Jack Bailey left Shadow Creek behind five years ago when his world imploded around him, knowing it would be best for everyone if he was gone...including Lily. It took him a long time to get his life back on track and grow into the kind of man she needs him to be. Now he's determined to prove to Lily that he's back for good and ready to commit, but the secrets she's holding onto are nothing compared to the bombshell he drops...

Victoria James slays me with her writing.  Every.  Single.  Time.  The Baby Bombshell is no different.  This is a second chance love story where tissues are required.

Five years ago, Jack Bailey lost his identical twin brother and young nephew in a horrible accident.  Unable to even look at himself in the mirror, he didn't think anyone else could stand to see him either.  Not being able to handle his grief, Jack unexpectedly leaves his life in Shadow Creek behind.  That life included his parents, younger sister, best friend, and his fiancée.  While he was gone, a lot of things changed.  But one thing remained the same, his love for Lily Cookson.

Five years of taking life’s bumps and bruises on her own has taken a toll on Lily Cookson. Finally, something is going right in her life.  She’s about to open a chocolate shop with her best friend, Gwen Bailey.  What she doesn't expect or need is for a Christmas miracle in the form of Jack Bailey returning to his family and knocking her world on its axis.

Jack knows he has a lot of making up to do, not only with his family but with Lily.  In the five years since he's been gone, he has never contacted her once.  But that doesn’t mean that he hasn’t been following her life.  He's now ready to be the man he should have been 5 years ago,  both with his family, friends, and especially Lily.  “Give me tonight. One night to prove to you that we still belong together.”

The Baby Bombshell is a second chance love story full of secrets and regrets.  But this is also a story full of love, perseverance, and determination.  “I still love you and I’m not going to throw in the towel. I will fight for you.”

Victoria James takes readers on an incredible journey.  While Jack and Lily’s road to a happy-ever-after isn’t smooth, Victoria does show that love is a powerful thing and worth fighting for.  Prepare to lose yourself in this wonderful story that will have your heart breaking, only to be put back together again.

The Shadow Creek, Montana Series:
(Clicking on the book cover will take you to Amazon.)

Christmas with the Sheriff ~ Review