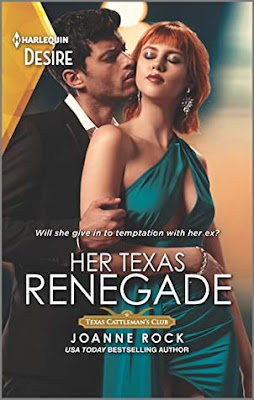 Will she give in to temptation with her ex?

Mixing business and pleasure with a former flame,

she’s bound to get burned…

Wealthy widow and business owner Miranda Dupree needs a security expert, and her ex, bad-boy-hacker-turned-security-magnate, Kai Maddox, is perfect for the job. But can they keep their steamy, tumultuous romance in the past when the renegade billionaire is so darned tempting? Miranda can’t help herself, and soon an innocent business proposition leads to a replay of passion beyond their control…

The Texas Cattleman’s Club: Inheritance series kicked off with Tempting the Texan by Maureen Child. The series revolved around the children of Buck Blackwood and their quest to contest their father’s will after he died and left his vast billion-dollar fortune to his younger, ex-wife Miranda Dupree. However, things were not as they appeared. The past five months have found Miranda following Buck’s requests as set out in a series of letters to her. Buck wasn't an easy man to get along with. He wasn't a very good father or husband, however, he did love his children and ex-wives. In his death, Buck wanted to make sure that his children were taken care of, grew as individuals, and were on the right path so they wouldn't turn out as he did. When all of that was taken care of, the true contents of the will were revealed in Too Texan to Tame written by Janice Maynard. That story also revealed that something strange was happening with Blackwood Bank and Miranda was very concerned about it. So much so that she tracked down her ex-boyfriend, Kai Maddox.

Ten years ago, Miranda and Kai had a whirlwind romance. Six years her junior, Kai understood Miranda like no one else did. The two spent hours talking and dreaming of having and making a better life for themselves. Miranda wanted to expose the world to yoga and Kai wanted to excel at cybersecurity. During the same time, Miranda met Buck and well...she achieved everything she wanted.

The ten years since Miranda broke his heart have been both good and bad for Kai. He introduced his younger brother, Dane, to the life of being a hacker and watched in horror and disbelief while he went to prison for something Kai should have done. Kai and Dane have since co-founded the cybersecurity firm MadTec and found ways to give back to the small community that helped them when they needed it the most. Miranda's business proposition is what the Maddox brothers need to finally show the security world that their business is legitimate. Too bad Kai doesn't want to be involved with Miranda on a business or personal level. But cooler and wiser heads prevail.

While Kai and his team work on the Blackwood Bank problem, Kai finds himself back in Miranda's bed. To both of their surprise, the attraction and passion they once shared is stronger than ever.

I loved Her Texas Renegade. Miranda has been one of my favorite characters since the beginning of the series. This story allows you a look into her past to see the woman she truly is. I love that Joanne Rock stripped these characters down so that you could really get to know them. Watching Miranda and Kai overcome the issues with their past and fall in love again was great. Her Texas Renegade flowed smoothly, with a small amount of conflict. A few of the past series characters make an appearance or two, and you get nice little updates on them. Joanne really ended this series nicely. She's a new to me author and I'm really looking forward to reading more from her in the future.

“Circumstances help to make us who we are--good or bad.”

“Part of being a strong person means learning to back down when you’re wrong.”

USA Today bestselling author Joanne Rock turned a passion for writing into a career when imaginary characters kept her awake at night, demanding she tell their stories. The author of over one hundred romances in a variety of sub-genres, she enjoys small-town family sagas as much as high-drama glitz and glamour. Joanne has won numerous awards for her stories including the Romantic Times WISH Award, the Snow Globe, and multiple Cataromance Reviewer’s Choice Awards. Her work has been reprinted in twenty-six countries and translated into twenty languages. After receiving her Master’s degree in Literature from the University of Louisville, Joanne went on to teach writing, film, and fiction at colleges in KY, UT and NY. She enjoys sharing her passion for the arts at creative writing workshops, career fairs and with aspiring writers she meets online.