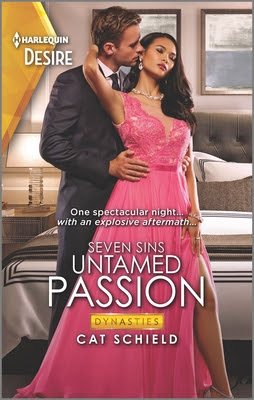 Feel the drama and passion in the Dynasties: Seven Sins series!

One spectacular night… with an explosive aftermath!
Desire as volatile as theirs has consequences that could last a lifetime…

When a single rapturous night with Sammi Guzman leaves the intoxicating model pregnant, photographer Oliver Lowell is determined to embrace his responsibilities. But his wrath over his father’s numerous betrayals has haunted him for years and leaves Oliver feeling ill equipped for parenthood. Passion has never been his and Sammi’s problem, but will this black sheep tame his demons for good?

Fifteen years ago, Vernon Lowell stole millions of dollars from his family and clients at Black Crescent Investments. He later disappeared without a trace, never to be seen or heard from again. The Dynasties: Seven Sins series shows the fallout of his actions and how they affected not just his heirs, but the heirs of the families he stole from as well.

As the youngest of three kids, Oliver always felt unloved and overlooked by his parents and twin older brothers. When excelling at sports and school got him no attention, he stopped trying. With the scandal surrounding his family, Oliver turned to drugs and alcohol. After almost dying, Oliver gave up his addictions and became a sought after photographer.

Sammi Guzman is a twenty-six-year-old model who has been in the industry her entire life. She thinks it’s time for a change, but her manager/mother won’t allow it. After breaking up with her boyfriend, Sammi meets Oliver, who just happened to be her teenage crush. The two share a night of passion which results in Sammi becoming pregnant. Oliver is shocked and surprised to discover Sammi is carrying his child. While he doesn’t feel his past has taught him how to love, he knows he wants to take care of Sammi and his child, and have them both in his life.

I loved Untamed Passion because it was different. Yes, there are parts of the story that are predictable. But I genuinely loved Oliver and Sammi. They both carry baggage from their childhoods and adult lives. However, they truly complement and bring out the best in each other. The love they have for each other helps them heal and address the issues they have with themselves and their respective families. Untamed Passion was a story I didn’t want to end. I literally want to see Sammi and Oliver tomorrow, next week, next month, and years from now.

~ Favorite Quotes ~
“The only way I can stop letting my anger rule me is to let go of past resentment.”