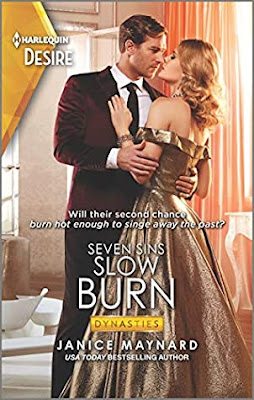 Will their second chance burn hot enough to singe away the past?

The prodigal playboy is back
and nothing is the same…

…except the attraction that still sizzles between Jake Lowell and the woman he left behind. But the globe-trotting bachelor is in for a surprise! Nikki Reardon is now a mother—to the daughter he never knew. He once blamed Nikki for the fall of his iconic family…now he can’t resist her. Will their slow burn spark a second chance or burn down all they hold dear?

Fifteen years ago, Vernon Lowell, founder and CEO of Black Crescent Hedge Fund, and his best friend and company CFO, Everett Reardon, stole millions from their families and clients. Everett died in a crash while being pursued by police. Vernon escaped to parts unknown. The lives of their families and the families they stole from were uprooted and destroyed. Many of the families had teenage children at the time. The Seven Sins series looks at eight of the children and showcases what the past fifteen years have been like for them. Many of the children have gone on to have successful lives. But one thing is for sure, they all still carry the pain of what they and their families endured.

“The sins of the fathers are visited upon the children.”

Jake Lowell is one of Vernon’s three sons. For the most part, Jake had his life planned out. At twenty-two years old, he had extremely strong feelings for seventeen-year-old Nikki Reardon. After dating for a while, they were waiting for her eighteen birthday to take their relationship to the next level. Jake was a very happy and content man. All of that changed with the embezzlement from Black Crescent, orchestrated by Vernon and Everett. Not being able to deal with the scandal, fallout, and whispered speculation, Jake fled Falling Brook, New Jersey for Europe and never returned.

Nikki and her mother also eventually left Falling Brook. But unlike Jake who prospered to live a comfortable if not oftentimes lonely life, Nikki and her mother struggled. They learned to survive with very little and lived paycheck to paycheck. Ten years after Nikki and Jake last laid eyes on each other, they serendipitously run into each other in Atlantic City. They shared a very intense and memorable night together. Unfortunately, Nikki woke up to find that once again, Jake left her. Never in her wildest dreams did she expect her one night with Jake to result in her becoming pregnant. With no way to contact Jake directly, Nikki sets out on a path of single motherhood.

Now Jake has returned to Falling Brook and is surprised to learn he has a four-year-old daughter named Emma. He wants to do right by Emma, but he can’t help but hope he can rekindle a little of what he had with Nikki as well.

Usually, the heroes own my heart. However, in the case of Slow Burn, Nikki owned it hands down. I loved her strength and her resilience. I loved her outlook on life. She went from the life of being a rich princess to being a popper. Instead of being bitter, she’s gracious. I’ve enjoyed and loved the other books in this series, but I have to say Slow Burn is in my top three favorites. Janice Maynard has written a wonderful story to end the Seven Sins series. I loved the vulnerability and courage both Jake and Nikki showed. Nikki is a woman who frightens Jake because she shines and doesn’t just do things because he tells or asks her to. She challenges him to be a better person, brother, friend, father, and lover.

I highly recommend the Seven Sins series. If second/third chance and secret baby is your jam, you should definitely read Slow Burn. I do think Untamed Passion by Cat Schiled should be read before Slow Burn. It features Vernon’s youngest son, Oliver. The oldest Lowell son, Josh, can be found in the first book, Ruthless Pride, written by Naima Simone.

~ Favorite Quotes ~
“The past is the past. We can’t change any of it.”

“Forever is a long time. Bitterness and anger poison your soul.”

“The good things in life aren’t always measured by dollars and cents.”

**Received a copy of the book courtesy of the publisher and voluntarily reviewed it. Also personally purchased a copy myself.**

Janice Maynard knew she loved books and writing by the time she was eight years old. But it took multiple rejections and many years of trying before she sold her first three novels.

After teaching kindergarten and second grade for a number of years, Janice took a leap of faith and quit her day job. Since then she has written and sold over forty-five books and novellas. Her publishers include Harlequin, Kensington, Penguin, and Berkley.

Janice lives in east Tennessee with her husband, Charles. They love hiking, traveling, and spending time with family.