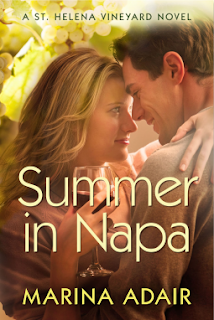 When Alexis “Lexi” Moreau caught her husband, Jeff, sampling the sous-chef’s more intimate wares in their New York restaurant, she ran—all the way back to her hometown of St. Helena, California. Six months later, Lexi has no husband and no restaurant. But she does have a three-step plan: First, convert her grandmother’s bakery into her dream bistro. Second, ignore Grandma’s matchmaking attempts. And third, avoid Marco DeLuca, her ex’s commitment-phobic, distractingly sexy best friend.
In school Lexi was off-limits for Marco. After all, she was his buddy’s girl. But she’s still as smart and as gorgeous—and apparently as immune to his charms—as she used to be. Yet the simple fake romance they agree upon to dodge Lexi’s grandmother’s matchmaking plans soon turns deliciously complicated. And the sultry summer might bring together all the right ingredients for Marco to win the only woman he’s ever wanted.

Summer in Napa, the second book in the St. Helena Vineyard series by Marina Adair did not let me down nor disappoint me.  Yes, this is the second book in the series but you don’t have to read the first to enjoy this one.  I read the first book, Kissing Under the Mistletoe and honestly, I think I like this one better.  I know if you read the first one, that’s hard to believe.
Summer in Napa has a completely different feel than it’s predecessor.  It’s hilarious and charming.  It’s a book where the humor will smack you in the face from the very beginning.  It’s really important that you don’t drink anything while reading this book.
Awwww...I FINALLY get Marco “Marc” DeLuca. Excuse me, while I smile at the memory of him.  Marc isn’t like the typical heroes you read in other romances.  Yes, he’s a playboy.  Yes, at one point he lived through a really dark time in his life.  But he isn’t the hero who goes kicking and screaming when it comes to love and what he wants.
Marc is the only member of the DeLuca family who isn’t working for the family’s wine business in some form or fashion.  Not that Marc doesn’t like the business, he just wants to strike out on his own to prove himself.  Marc is the owner and operator of the Napa Grand Hotel, something he has wanted to do since he was a teenager.  Marc’s dream goes against what his family thinks he should do.  The DeLuca family is a strong, opinionated group that is all about family sticking together and wine.
Her whole life, Alexis “Lexi” Moreau has been trying to not be like her mother who kept falling for guy after guy.  Thus, for over fifteen years, she has clung to the first guy who gave her any attention at all, Jeffrey Balldinger.  No matter how bad Jeff treated her or appeared to only be thinking about himself, Lexi stuck with him.
Now, Lexi has returned to St. Helena to lick her wounds, regroup, and start a new and better chapter in her life by finally fulfilling a long standing dream of opening a bistro with her grandmother.  A little over six months ago, Lexi discovered that her ex-husband who happens to be Marc’s best friend, cheating on her with her sous chef.  As if that wasn’t enough, Jeff also stole their restaurant out from under her and it’s recipes (which she created by herself).
The Granny Brigade, consisting of Marc and Lexi’s grandmothers and another Granny friend, make an attempt to help Lexi get on with her social life.  Not that she asked for this or anything.  The Grannies manage to set up a profile for Lexi on an online dating site and schedule her to have several daily dates with various men from around town.  Marc realizes how much Lexi hates this and comes up with the idea of pretending to be her boyfriend so that the Grannies will leave her alone and she can focus on creating recipes for her new business venture.
Having to be seen as a couple in public forces the two to remember the old feelings they had for each other as teens.  Marc is hesitant because of his friendship with Jeff, but eventually their feelings win out.  Marc soon begins to realize that things aren’t adding up with what Jeff has been telling him.  Marc is going to have to make a decision that could cost him his best friend, his family’s money and Lexi.
Summer in Napa has tons of hysterical, heart wrenching and what the hell moments.
One of my favorite lines from Marc is:
“And I love her so damn much that I have no idea how I’m supposed to wake up tomorrow and pretend like my life hasn’t just fucking ended.”


But one of my favorite scenes (note: some of the detail is left out as to not spoil what’s actually happening.) is:
Gabe clapped him on the back, and they headed toward the table a united front, DeLuca dialed to high and badass brothers cranked up to one hundred proof.
“Plus, we’re Italian,” Trey said as they passed the front table.
“Meaning what?” Marc asked.  “We’re leaving the gun and taking the cannoli?”
“No,” Gabe said.  “Meaning you don’t fuck with our family, our wine, or our women.”

The DeLuca’s are a large Italian family with big and varying personalities.  You would think that would make them over the top, but it just makes you love them more.  I love this series and its characters.  I can’t wait to see what happens next in St. Helena with the DeLuca’s and their friends.


You can check out my interview with Marina relating to Summer in Napa HERE.  There is also a chance to win a signed ARC from Marina.

Books in the St. Helena Vineyard Series
1.  Kissing Under the Mistletoe (review)