Review ~ SEX AND THE SINGLE VAMP by Robin Covington 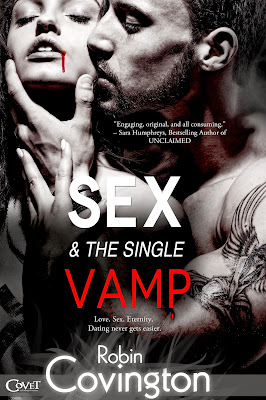 Cici Trent, vampire and media darling, spends her days finding true love for humans and supernaturals (the “Others”) at her dating agency. But someone is trying to sabotage her business and she needs help. Unfortunately, the best man for the job is the one who broke her still beating heart two hundred fifty-four years ago.
Deacon is a patient vampire. He’s only loved one woman in over three hundred years— CiCi— and she chose another. So when she shows up in his office asking for help, he finally has the chance to lay that demon to rest. He’ll help her, but for a price—a night in his bed.
Adrenaline, mischief, and a little late-night B&E light the passion that even a couple of lifetimes couldn't put out. But Deacon has a secret and when Cici is suddenly mortal, his deception might be the only way to restore her immortality. Can love bridge the gap between a heartbeat and forever?

Oh my gosh.  I don’t know what to say about this book.  I totally mean that in the BEST way possible.  Sex and the Single Vamp is the best book I’ve read from Robin Covington.  This is a HOT paranormal romance with suspense elements; delivering on both in spades.
Almost two hundred and forty years ago, Thomas Samuel Deacon made a promise to turn a dying Felicity “Cici” Trent into a vampire and protect her with his life.  He also made a promise to himself to make the people responsible for killing her and her family pay with their lives.
Fast forward to the year 2014 and Deacon, as he likes to be called is richer than he could ever imagine and the owner of Aura Mortis Security.  Cici is the owner of Your Other Half, a dating agency who matches humans with Others (non-humans).  There are people in the world who believe humans and Others should not be together.  Deacon is actually one of those believers.  Cici is currently a media darling and is on all the invite lists, but her business is starting to suffer.  Her clients are being killed and the police think she’s behind the deaths.  The only person Cici can turn to is Deacon, a man she hasn’t seen in over 70 years and also the man who broke her heart.
Deacon has his secrets. He's willing to prove Cici’s innocence if she will simply sleep with him.  Of course, it can’t really be that simple.  Deacon is a real piece of work. I don't know if I should be turned on by his Alphaness (is that a word?) or want to kick him in the shins. Not only are the police investigating Cici for murder, but someone is also trying to kill her.  With multiple attempts made on her life, time is running out to find out who is behind everything.  But is the threat closer than anyone thinks?  Deacon’s word is his honor.  He always keeps his promises and he is willing to make the ultimate sacrifice to make sure the world is never without Cici.
Sex and the Single Vamp is simply mesmerizing.  Robin’s writing allows the scenes to come to life on the page, as if you are actually there witnessing everything.  I am so hoping this book is the start of a new series.
Rating: 5
Release Date: March 24, 2014
Book Length: 200 pages
Source: Publisher
Reviewed by: Kim
Reading Format: Available only in eBook

Click here for an excerpt of Sex and the Single Vamp