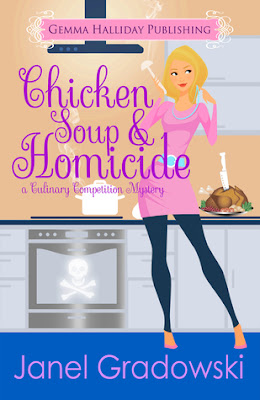 
Amy Ridley and her friend, Sophie, have perfected their chicken soup recipe, and the winter-weary residents of Kellerton, Michigan can't wait to watch them compete against other local chefs in the Chicken Soup Showdown. But the charity event starts out with a bang, literally, when one of the rival chefs falls out of a freezer and onto Amy. If it wasn't stressful enough for Amy to catch a dead body, the detective in charge of the investigation targets her best friend, Carla, as the chief suspect in the murder.

Includes recipes!
REVIEW
Amy Ridley is back.  This time, she's competing in the Chicken Soup Competition with her new friend Sophie.  The competition is a pretty cool one, pitting local foodie celebrities/restaurant owners against each other.  The winning team will win a small cash prize for themselves, with a bigger cash prize for a local charity of their choice.

This is Amy and Sophie's first time competing together and in this competition.  Tensions are high but things are about to get more tense when Amy finds the body of Celebrity Chef Chet Britton.

Amy, Sophie, and Amy's best friend Carla become suspects when a new detective arrives in town and takes over the investigation.  Amy has to worry about herself and her friends going to jail because the detective has no clue what the words “detect” or “investigate” mean.  She is also worried about her husband, Alex, who is putting work before her and spending insanely long hours at his office.  When the detective starts to harass Amy and her friends, she has no choice but to put her sleuthing skills to work.

What I loved about this book was trying to figure out who the murderer was and why.  Chet wasn't well liked so the list of suspects was definitely long.  I will say that I was surprised with the reveal, but if I would have paid more attention, I might have figured it out.  I admit that I was upset that I missed all the clues.

Janel Gradowski has written likeable characters which help to make this a good series.  Okay, so sometimes I don't like Amy because she has this ability and need to always cook.  It just makes us non-cooks and wannabes look bad.  Needless to say, I am looking forward to the next book in the series.  It should be noted that while Chicken Soup & Homicide is the second book in the Culinary Mystery Series, it can be read as a standalone.

You can read my interview with Janel here