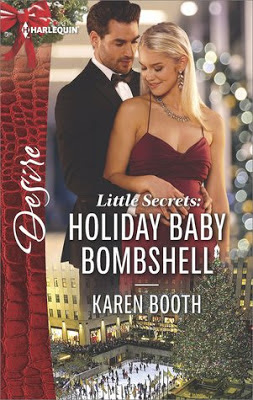 From Rivalry to Revelry…to Romance?

Competitive swimmer turned real estate magnate Michael Kelly is tastier than a Christmas cookie. But now Charlotte Locke's sexy former lover is her top business rival…and the father of her unborn child. Determined to keep her professional cool, the hotel heiress hides her delicate condition from her family—and from her commitmentphobic ex. Until Michael moves in next door, exposing a desire left unquenched and Charlotte's pregnancy secret.

Michael may not be daddy material, but losing Charlotte and their baby isn't an option. He'll close the deal at any cost—even if it takes a Christmas miracle to prove this playboy is reformed for good!

It’s been awhile since I’ve read Karen Booth and I’ve forgotten how much I enjoy her writing. Holiday Baby Bombshell combines a few of my favorite romance themes. This is a second chance, secret baby, and Christmas romance all rolled together.

From the outside looking in, both Michael Kelly and Charlotte Locke had amazing lives growing up. Even as adults, they seem to be living out their dreams. However, nothing could be further from the truth. Charlotte lost her mother at an early age and never received the emotional love and support from her father that she deserved. Charlotte views herself as being flighty and consistently messing up when nothing could be further from the truth. Luckily for her, she has her two older brothers (Sawyer and Noah) and Aunt Fran. Michael’s father was a dictator who expected perfection from his sons. He wanted Michael and his brother Chris each to be Olympic gold medal swimming champions, and pushed them hard to meet that goal. When Michael left the sport, he set his sights on conquering the real estate world, much to his father and mother’s disdain. This put him on a course to meet Charlotte who is a hotel heiress.

Charlotte and Michael dated for three months. But things came to an end when Charlotte realized that she was in love with Michael and wanted more from their relationship than Michael was willing to give. Michael doesn't do romantic relationships after a disastrous engagement. In fact, the three months of being exclusive with Charlotte felt like a lifetime to him. Michael thinks he’s happy being at the top of the real estate world until he sees Charlotte for the first time after their breakup.

This Christmas season, fate conspires to bring these two back together again. And a Christmas surprise will bring understanding and love. I should mention that sometimes book titles don’t really go with the book itself. In the case of Holiday Baby Bombshell the title fits perfectly.

I liked the characters of Charlotte and Michael. I loved the way they pushed each other’s buttons. Their passion for each other is hard to contain. I loved watching Michael grow as a person and overcome his fears. While I admired Charlotte for overcoming all the curveballs life threw at her, I wasn't too happy with her keeping her pregnancy a secret so far into the story or her response when Michael found out. I’m a sucker for the declaration of love scenes and I have to say, I loved what Michael did. Reading Holiday Baby Bombshell introduced me to the Locke Family. I now have to go back and read Sawyer’s story, Pregnant by the Billionaire, and I’m also looking forward to Noah’s story, Between Marriage and Merger. As as matter of fact, I wouldn’t be opposed to a Chris Kelly story, if Karen chooses to write one.

Between Marriage and Merger releases February 1, 2018