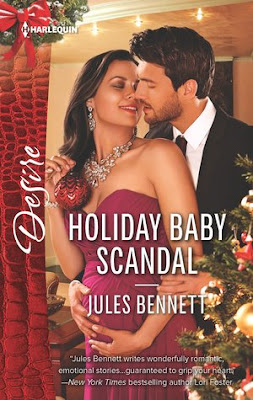 'Tis the season…for an unexpected baby surprise… Taken in at a young age, Ryker Barrett owes the O'Shea family everything. Which means his "little sister" Laney is way off-limits…no matter how seductive the brunette beauty is! She's the one woman he can't have a casual fling with…so how in the hell did he end up in her bed? Laney knows the dangerous Ryker is the perfect man for her no matter how hard he resists. But when one night of unbridled passion leaves Laney pregnant with his child, she'll need a Christmas miracle to convince him that loving her won't destroy his place in her overprotective family.

Holiday Baby Scandal is a friends to lovers/best friend-sibling romance and then some.  This is a mafia story with bad guys going legit and a haunted, troubled bad boy in the mix.  Even though this is the third book in the Mafia Moguls series, it is a standalone read.

Ryker Barrett grew up a Southie in Boston.  The only family he had was his alcoholic father who either ignored him or used him as punching bag.  Things changed when he was twelve-years-old and came to the aid of Braden and Mac O’Shea.  The three quickly became friends and when the boys’ father Patrick learned of Ryker’s home life he quickly took him in and made him a member of the family.  Patrick gave Ryker all that he could ever ask for, a stable home, and a family.  Ryker went on to become the family enforcer as well as their right hand man who helps to secure pieces for the O’Shea’s auction house.  In return, Ryker has received more money than he’s ever dreamed of.

Laney O’Shea is 1o years younger than Ryker and is the youngest of the O’Shea children. She’s always known she was a Mafia Princess, even if her father and everyone else tried to shelter her.  She works for the family auction house and has crazy good computer skills. Laney has had a crush on Ryker for as long as she can remember.


The two have always been close friends but one passionate night in Miami changed their lives forever.  That passionate night resulted in a surprise pregnancy.  Now Laney must convince Ryker that passion like theirs can’t be denied and that he’s the only man for her.  “Maybe it’s time you stop fighting whatever you’re feeling and just go with it.”  Ryker feels he isn’t capable of love, isn’t good enough for Laney, and is afraid of becoming his father.  “I’m lost.  I have no idea what the hell I’m doing.”  But Laney is bound and determined to have a family with Ryker.  Overwhelmingly, Ryker’s conflicted between his feeling for Laney and his loyalty to Mac, Braden, and the memory of Patrick.  “I’m new here.  I can’t mess this up, for you, for our baby.  Just...don’t give up on me.”


In order to become the family they want to be, they have come to terms with their true feelings for one and other.  They also have to deal with Laney’s brothers, the FBI who has obtained information only an insider should have, and an investigator snooping around.


Holiday Baby Scandal marks my first time reading Jules Bennett and it won’t be the last. From start to finish, I was captivated.  My heart ached for young Ryker as well as adult Ryker, as he tried to figure out his feelings and his place in the O’Shea family.  Laney was great with her “I can do everything by myself” and “don’t mess with my family” attitude.  There was the added surprise of a little mystery to the story.  The only downside is that the mystery wasn’t resolved.  Hopefully, it will play itself out in the next book.  I can’t wait to see what happens.


**Received a copy of the book courtesy of RWA and voluntarily reviewed.**