Review ~ A CHRISTMAS TO REMEMBER 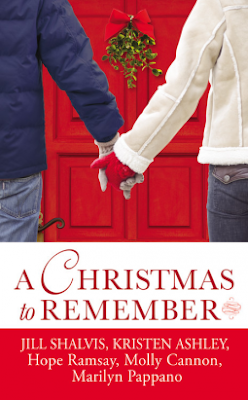 Curl up with this heartwarming Christmas collection!

********************
Dream a Little Dream by Jill Shalvis
Melissa has kept every man at a safe distance-especially firefighter Ian, a sexy friend with sexy benefits. But Ian secretly longs for more. Luckily, 'tis the season for giving love a chance . . .


I will admit, I'm behind on reading the Lucky Harbor Series.  But I must also admit that this was a really good read to return to Lucky Harbor with.  I don't know if Melissa and Ian have been mentioned in the other books, but I immediately fell in love with them.

Melissa and Ian share a history.  In fact, up until six months ago, they were friends with benefits until Melissa broke things off out of fear of committing too much to Ian.  But when tragedy strikes, Melissa starts to question her past and decisions that she has made.  Now, she's on a mission to win the heart of the man she loves and knows will always be there for her.  This Christmas, Melissa and Ian's hopes and dreams are about to come true.

Every Year by Kristen Ashley
Holidays don't come easy for Shy and his brother, Landon. But with the magic of Christmas, along with a little help from Tabby and her family, the Cage brothers are about to get the gift of a lifetime . . .


Every Year is the first book I’ve read from Kristen Ashley.  I have to say, I like her writing style, but I’m not a fan of the story.  While I found the story to be enjoyable, I think I would have liked it better if I would have been familiar with the characters, from reading the first book in the Chaos Series, Own the Wind.

Told in first person by Tabitha (aka Tabby), Every Year is more of the story of Tabby and Parker’s (aka Shy) first Christmas together as a couple.  I have a feeling that I’m missing a lot of background info, since these two have some sort of past that maybe they saved each other from.  What I do get is that Shy and his brother Landon had a less than ideal childhood, after their parents were killed.  As a result, Christmas wasn’t always good for them but they are slowly working on being happy and realizing that they have a right to be happy.

Another thing that I’m sure of is that Tabby is extremely thankful and in love with Shy, just as he is she.

Silent Night by Hope Ramsay
Down on her luck and evicted from her apartment, single mother Maryanne hopes to start over in Last Chance. When the snow begins to fall, it looks like her baby might literally spend Christmas Eve in a manger. And Maryanne might celebrate the holiday with a handsome stranger.


Taking a wrong turn is about to lead Maryanne Carpenter to the man of her dreams.  Maryanne is a single mother who is more than down on her luck.  She doesn’t have any money, she has a crappy old car and has just been kicked out of her apartment in Alabama.  With no where else to go, Maryanne is making a Christmas Eve journey to Last Chance, South Carolina hoping that her cousin, whom she hasn’t seen in twenty years still remembers her and will allow her to stay with her.

Daniel Jessup is a divorced lawyer living in Atlanta.  Originally from Last Chance, Daniel is back on this Christmas Eve to just escape Christmas and the ghosts of his past.  He’s also preparing to put his family’s farm on the market.  All in all, Daniel is just a man who is more or less just surviving life instead of living it.

After running out of gas, Maryanne ends up walking to what she believes is the Carpenter farm, only to find no one home.  When the rain becomes heavy, Maryanne takes shelter in a cold drafty barn.  Maryanne and Daniel’s paths cross when Daniel hears baby Joshua’s cries and goes to investigate.  Upon seeing the strangers, Daniel invites the two into the house.  By Christmas Day, these two strangers will realize that the other is just who and what they need for their lives to be happy and complete.

While in the end Maryanne and Daniel don’t proclaim their love to each other, you do get the feeling that one day down the road once they’re lives are sorted out they will.  And surprisingly for me, that’s good enough at the moment.

Hope Ramsay’s Silent Night is a wonderful read.  The story will tug at your heart, but in a good non-heartbreaking way.    I’ve read all three of Hope’s Christmas stories and I can tell you....she SHOULD always be your go to author for Christmas reads.

Have Yourself a Messy Little Christmas by Molly Cannon
Lincoln is a bachelor who's set in his ways-until a professional organizer dressed up as Mrs. Claus changes his life, one tip at a time...

Have Yourself a Messy Little Christmas ~ REVIEW


The latest installment in Molly Cannon's Everson Texas series is a sweet enjoyable read.  While I'll admit it took me a little while to warm up to the story, I'm glad I did.  Dinah Mason has only been in Everson, Texas for about a year.  Since she's been town, she's start her own company as a professional organizer.  Her new job is to organize the house of Bitsy Jones in time for Christmas.  The only problem is while Bitsy hired Dinah, she didn't mention this to her son, Lincoln who currently lives in the house.

Lincoln Jones is an accountant who loves his job.  He loves it so much, he often brings work home and spreads it out on his dining table.  Lincoln is also what you would call a slob.  When Lincoln realizes his mother hired a professional organizer to come in, clean, organize and throw away stuff, he isn't happy.

These two never expected to be so attracted to each other.  They seemingly have nothing in common.  She loves Christmas and he gripes about the commercialization if it.  When the professional line gets crossed only a twinkled eyed Santa can make things right.

A Family for Christmas by Marilyn Pappano
War widow Ilena doesn't mind spending Christmas alone. But when a new doctor blows into town with the winter wind, will she get her secret Christmas wish?

A Family for Christmas ~ REVIEW


A Family for Christmas is a short story going along with Marilyn Pappano's Tallgrass Novel Series.  I found the story to be a sweet enjoyable read.

Jared Connors is from a family of successful doctors, from his parents to his siblings to their spouses.  The difference between Jared and his family is that he wants to help people who really need him and isn't in it for money or fame.  So instead of taking an East Coast job which could be considered posh, Jared takes a job as a pediatrician in small town Tallgrass, Oklahoma.

Ilena Gomez is a young Army widow with a six month old son and a love for life and all things Christmas.  It's been a year since her husband was killed, however, she's still open to the possibility of finding love again.

What starts out as a friendship with Ilena helping Jared get use to his new town quickly becomes a deeper, loving relationship.  But when a conversation goes the wrong way, sometimes it takes a little elfin magic and roll reversals to finally have A Family for Christmas.