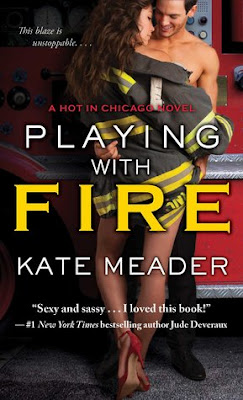 
Heating up reading lists and leisure time long after the summer heat has cooled will be Kate Meader’s PLAYING WITH FIRE, which tells the story of rookie firefighter Alex Dempsey. She may be the only woman in Engine Company 6—and may have burned through thirty-four dates in the last ten months—but she’s got everything under control. At least until she rescues Eli Cooper, Chicago’s devastatingly handsome mayor, from a hotel blaze. These two have clashed before—Eli’s a brilliant politician, used to the spotlight, and Alex has no use for a man who can smooth-talk anyone into anything, including his bed. But after their headline-grabbing encounter, Alex is the one starting to sizzle…
...but first she’ll set his world aflame…

Eli Cooper has one goal: winning the next election, and Alex, his sassy savior, may be the spark he needs to light up his sputtering mayoral campaign. “Dating” the female firefighter who saved his life is political gold, but her total lack of filter makes Eli incensed—and more than a little hot and bothered. For the sake of ratings, their bickering will have to wait until they get some privacy…
And once these two are alone together, there’ll be no way to extinguish the flames in Kate Meader’s second sizzling installment in the Hot in Chicago series, PLAYING WITH FIRE!

“Meader packs the flawless second Hot in Chicago romance with superb relationship development…and note-perfect dialogue…The secondary characters play their parts beautifully, and Eli and Alexandra are a captivating couple…”
—Publishers Weekly starred review
“Thank you, Kate Meader, for creating a heroine who does not fit the status quo! The idea of a plus-size female firefighter being described as sexy and irresistible makes this book stand out. Meader also provides readers with steamy sex scenes, colorful characters and riveting dialogue. The themes of staying true to yourself and the impact of family legacies make for an interesting storyline. This tale is a real page-turner.”
—RT Book Reviews four and a half star “scorcher” TOP PICK GOLD review

REVIEW
Playing with Fire, the second full length novel in Kate Meader’s Hot in Chicago series is a standalone read.  As with the previous books, Kate brings heat.  But I found this one to be a little more humorous than others.  After all, this is a enemies to lovers romance with a fiery heroine and a buttoned up politician hero.

I don't think I've been so conflicted about a hero before. I love Eli Cooper. I’m not even sure how that is even possible.  Eli is arrogant, chauvinistic, and does whatever it takes to get what he wants.  But all of his actions come from a good place.  Thus in the end, he leaves you with no choice but to love him.

I’m not sure how I missed it, but Alexandra Dempsey is a full figured heroine.  I love that!!! Even better, she’s comfortable in her own skin.  Alex is....in a league all on her own.  She isn't a damsel who needs rescuing.  She has the mouth of a sailor.  She defends herself and her family without thinking.  She's a loose cannon.  But this is what makes her perfect for prim and proper Eli Cooper.

The Dempseys and the Coopers go back a long way.  In fact, the fathers were partners in Dempsey’s on Damen back in the day.  Today, that friendship and camaraderie doesn’t exist.  Eli is the mayor of Chicago.  Alex and her foster brothers are Chicago firefighters, known as the Firefightin’ Dempseys.  As mayor, Eli has been coming down hard on the Dempseys in the last couple of months, due to their actions both on duty and off.

It’s no secret there are sparks between these two.  When Alex saves Eli from a fire, the frenzy about them being a couple goes crazy.  With Eli’s poll numbers dropping and with election day only weeks away, the idea forms to use Alex to get voters and the unions on his side.  In order to accomplish this, Eli turns to extortion/blackmail to get Alex to pretend to be his girlfriend in public.  Lines get blurred and the spark between these two turns into a full fledged fire.

I generally know what I’m going to get when I pick up one of Kate Meader’s books.  It’s a given there will heated moments.  It’s a given she will have you laughing.  It’s a given you will embrace the characters.  What surprised me was the back and forth banter between Eli and Alex.  The two have this push and pull relationship where Eli wants to control Alex and get her to conform to his ways.  Unfortunately for him, he’s never met anyone like Alex.  Something else that surprised me was Eli himself.  Underneath his thousand dollar suits and his calm cool demeanor this very refined man is a dirty talker. Hello.

If you’re looking for an enemies to lovers romance that will make you laugh and fall in love with the characters, Playing with Fire is for you.  I’m really looking forward to the next book in this series.  The mystery of just who oldest Dempsey sibling Wyatt Fox is will finally be revealed.  I can’t wait.

I’m excited to do a Fire Giveaway today for Kate Meader’s PLAYING WITH FIRE blog tour.  The Fire Giveaway will include Flirting with Fire and Baby, It’s Cold Outside (which includes Kate Meader’s Rekindle the Flame, the prequel Hot in Chicago e-novella which will publish 11/30/15 for $1.99!) You can visit all sites on the blog tour to enter the Fire Giveaways – but keep in mind you can only win once! U.S. only. *Giveaway lasts TODAY ONLY!*

Kate Meader was raised on romance. An Irish girl, she started with Catherine Cookson and Jilly Cooper novels, and spiced it up with some Mills & Boon. Now based in Chicago, she writes romances of her own, where sexy contemporary alpha heroes and strong heroines match each other quip for quip. When not immersed in tales of brooding mill owners, oversexed equestrians, and men who can rock an apron or a fire hose.


Watch this interview with Kate Meader!