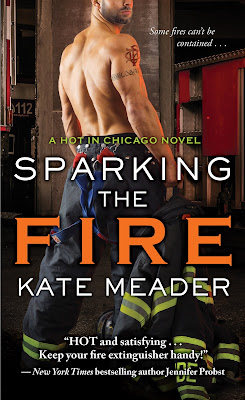 Kate Meader’s “sexy and sassy” (#1 New York Times bestselling author Jude Deveraux) Hot in Chicago series continues with this steamy third novel, where former lovers unexpectedly reunite for a sizzling affair that will have the director yelling, “Quiet on the set!”

AN OLD FLAME STILL SIMMERS…
Wyatt Fox, resident daredevil at Engine Company 6, needs a low key job to keep him busy while he recovers from his latest rescue stunt. Consulting on a local movie shoot should add just enough spark to his day. But then in struts Molly Cade: the woman who worked his heart over good, and then left him in the Windy City dust.
BUT WILL A NEW SHOT AT LOVE LEAVE HER BURNED?
Actor Molly Cade, America’s fallen sweetheart, finally has her shot at a Hollywood comeback with a dramatic new role as a tough-as-nails firefighter that promises to propel her back into the big time. And she’s not going to let anything stand in her way—even a certain brooding, blue-eyed firefighter she’s never quite been able to forget…

Their story is straight out of a script: irrepressible, spunky heroine meets taciturn, smoldering hero. But these two refuse to be typecast, and when the embers of an old love are stoked, someone is bound to get burned…

Their story is straight out of a script: irrepressible, spunky heroine meets taciturn, smoldering hero. But these two refuse to be typecast, and when the embers of an old love are stoked, someone is bound to get burned…

Praise for Sparking the Fire, Book 3:
“The tale of hot firefighters and the women—and one man—who love them has come to an end. Meader ends this series with role playing, fierce family loyalty and multiple orgasms. The male protagonist goes through a transformation that showcases his vulnerability, insecurities, possessiveness and protectiveness. The many instances of a family sticking together through it all are more than enough to tug on the heartstrings, but the steamy sex and sentimental pillow talk make this book a must-read.”
—RT Book Reviews Four Star Review, Scorcher
“Can a firefighter and a movie star really make it work? Meader (Rekindle the Flame, 2015) immerses you in Wyatt’s tight-knit family of foster siblings that she’s built throughout the Hot in Chicago series, and readers will feel like part of the family in no time. Her descriptions of Chicago will leave fans wanting to travel to the Windy City and fall in love with their own firefighters.”
—Booklist

Nooooooooo!  Please say it isn’t over!!  Sparking the Fire is the third and final book in Kate Meader’s Hot in Chicago series.  I would say she saved the best Dempsey for last, but Gage Simpson (Melting Point) has my heart.  However, Wyatt Fox is definitely giving his younger brother a run for his money.  Going into this book, I knew I was going to love Wyatt.  I just didn’t realize how much.

Wyatt Fox is the tall, brooding, quite, mysterious brother of the Dempsey family.  A family made up of up seven foster kids taken in by Sean (a firefighter) and Mary (a homemaker) Dempsey.  After Sean and his brother Logan died fighting the same fire, Wyatt and the rest of the siblings joined the Chicago Fire Department.  In honor of their family and their legacy, they all work at the same station, Engine Company 6.

After getting hurt during a rescue, Wyatt is sidelined for three months.  When the liaison for the CFD and “Hollywood” gets injured, Wyatt is tasked with filling in for him.  Secrets from Wyatt’s past and his present are about to collide.

Molly Cade has been put through the ringer, both emotionally and publicly.  After going through a contentious divorce from an A-list actor, and having private personal photos leaked, Molly’s first job as producer and actor of her upcoming movie playing a firefighter has to be perfect.

I admit about 6% into this story I w-a-s not liking Molly Cade.  She arrived in Chicago at Engine Company 6 with the sole purpose of trying to befriend the Dempsey family so she could get close to Alex (America’s Firefighting Sweetheart) and get more details of her life for the movie.  It didn’t matter that she’s been told Alex isn’t interested and to leave her alone.  As with all the Dempseys, I guess you can say I’m a little protective of them as well. Little did Molly know that her specifically asking for someone from Engine Company 6 was going to bring her back to one of the best times of her life.

Little by little, Molly won me over with her personality, her openness, her insecurities, her vulnerabilities, and her protectiveness.  With her, the stoic Wyatt was able to let his walls down and be open about his past, his feelings, and his place in the family.  Together, they are this amazing couple who love and protect each other.  Good thing Wyatt is a firefighter because they are definitely combustible.

Kate Meader has done an amazing job of writing this series, where troubled foster kids were brought together and became a family by choice instead of blood.  I don’t think I’ve ever wished for characters to be alive, just so I could get to know them because of the love and admiration other characters feel for them.  Sean and Mary Dempsey taught their foster children what love and family was all about.  That “fire is stronger than blood and defend the people you love to the last ember.”   That lesson has been ingrained in everyone of the kids.  And they all live it.  In Sparking the Fire, Kate writes the crazy one liners that I love.  But she also cracked the shell of Wyatt and that in and of itself required several tissues.

It should be noted that while Sparking the Fire is part of series, it is a standalone read.

The Hot in Chicago Series:
(Click on the book covers for more information and/or to purchase from Amazon.)

You can follow the Sparking the Fire blog tour here.

We are excited to do a Fire Giveaway to celebrate the third book in Kate Meader’s Hot in Chicago series, Sparking the Fire. This giveaway will include Flirting with Fire (Book 1) and Playing with Fire (Book 2). You can visit all sites on the blog tour to enter the Fire Giveaways – but keep in mind you can only win once! U.S. only.

HOT TIP: Kate is also offering a $25 Amazon gift card during the Sparking the Fire release tour. It will run Monday September 26 to Friday October 7. a Rafflecopter giveaway
Follow
Posted by Kim at 5:12 AM