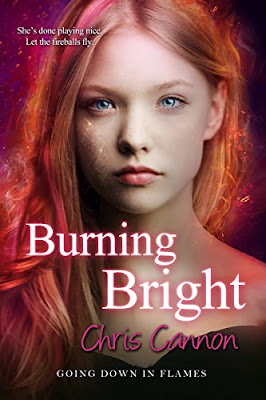 Bryn is back for her senior year at the Institute for Excellence, also known as shape-shifting dragon school. She isn’t sure which is scarier, the life-force sucking dragons stalking campus or the fact that she’s officially betrothed to Jaxon, a guy who will never love her. Not that she could ever love him, either… That’s just ridiculous.

Senior year should be fun. Her parents are alive, she’s finally fitting in, and she’s learning how to be a Medic. But what’s with Jaxon giving her strange looks? He runs hot and cold, and he doesn’t even have the excuse of being a hybrid fire-and-ice-breathing dragon like her. One minute they’re having a great time and the next, she wants to blast a fireball at his head. The marriage contract of doom looms over them--unless this match not made in heaven kindles a flame…

“Okay.” She set her mug on the bench and let him pull her to her feet. Should she tell her grandparents where they were going? That would kind of ruin the moment she and Jaxon might be having, so she shelved the idea.

Hand in hand, they walked down one of the slate paths back into the trees with the fairy lights. “This place is amazing.”

“This has always been my favorite part of the house. I used to spend a lot of time out here.”

They walked down a path and into a stand of trees. Several single swings and a double swing where two people could sit, like a porch swing, were suspended from the trees. There was also a staircase that spiraled around a tree and led up to a walkway suspended between the trees, high up in the branches.

“Can we go up?” Bryn asked. “Sure.” The spiral steps were easy to climb, but the walkway was higher up in the trees than it appeared from below. “What do you think?” Jaxon asked. “I think it’s the perfect place to hide from the world.”

Wait a minute. “You made fun of me last year when I said I wanted a treehouse.”

“This isn’t a treehouse, it’s a far superior tree bridge.”

Jaxon tugged her back toward the platform of the first tree. “There’s more.” Around the back side of the tree there was a bench. “If you don’t feel like walking, you can sit.”

“As one does when one is tired from adventures on their tree bridge.” She sat and relaxed back against the trunk of the tree, very aware of Jaxon’s proximity and the heat coming off his body.

She laughed. From inside the tree the fairy lights seemed even more magical. “You know this is basically a tree house without walls.”

“No. That doesn’t work for me,” he said. Bryn rolled her eyes but didn’t comment. “I saw that,” Jaxon said. “You were meant to.” Joking around with him felt comfortable. “This is nice.” “The tree?” he asked. “No.” She pointed back and forth between them. “This. Us. No pretenses or small talk...just us.” “Speaking of us.” He leaned in, slowly, like he was giving her a chance to move away. She met him halfway and pressed her mouth against his. Time seemed to slow down as his hand touched her cheek and then cradled the back of her head. Heat thrummed between them, burning bright as the kiss grew, which was strange yet somehow right.

The Going Down in Flames Series: Chris Cannon lives in Southern Illinois with her husband and her three dogs, Pete the shih tzu who sleeps on her desk while she writes, Molly the ever-shedding yellow lab, and Tyson the sandwich-stealing German Shepherd Beagle. She believes coffee is the Elixir of Life. Most evenings after work, you can find her sucking down caffeine and writing fire-breathing paranormal adventures or romantic comedies.

You can follow the Burning Bright Blog Tour here.