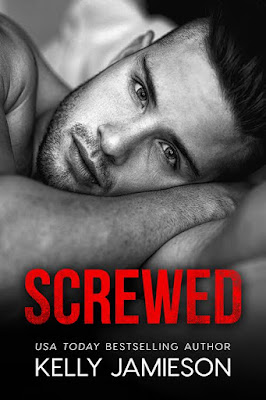 Cash Hale has been in love with his best friend’s wife forever. Now Callie and Beau are divorced, but she’s still way off-limits. Dating her would betray his friendship with Beau. And Cash is nothing if not loyal.

Callie Sutherland is starting over. The end of her marriage was just one more way she failed to live up to her wealthy family’s expectations, so from now on she’s not even going to try. It’s time to live her life the way she wants. And she wants Cash.

Cash and Beau aren’t just friends, they’re business partners, and the drop in the price of oil has hurt their business. They need to win the bid for Sutherland Industries’ next big project—but it may get messy since Callie’s family owns the business. Not only would Cash risk his friendship with Beau to be with her, he’d be risking the company they worked so hard to create.

But this new Callie isn’t taking no for an answer.

Kelly Jamieson’s Screwed was originally published in 2016 as part of The Sutherlands: One Family Saga anthology. Since I didn’t read the book when it first came out, I don’t know if there has been any changes to the story.

Screwed is a taboo/forbidden relationship story featuring Callie Sutherland and Cash Hale. Callie is a socialite from a prominent Houston area family. Cash is a self-made, established business man. The two know each other from college. But their connection is deeper. Callie is the ex-wife of Cash’s best friend and business partner, Beau. Callie is also Cash’s secret crush, going back six years.

Immediately, my heart went out to Cash for being in love with Beau's ex for years. He had a ringside seat to all of the couple’s ups and downs. Whenever Callie hurt, he hurt. I enjoyed reading the story, but my God, I had a serious dislike for Callie’s parents who are all about money and image.

Callie and Cash are so much more than what you see on the surface. They each have backstories that they don’t talk about. These stories have helped to shape their lives and make them the people they are today. While they may be from different worlds, they are really good for each other. I don’t want to give away anything that happened, because honestly, while I couldn’t think of a way for these two to be together, they found a way. I loved that Callie found her inner-strength, true worth, and learned to truly love herself. I loved that Cash decided to look at his earlier life in a different way and embrace new possibilities. My only complaint is that I felt the story ended too soon. Yes, I know that the book is over 250 pages long but, the story ended during what I would consider to be an important moment in Cash’s life.