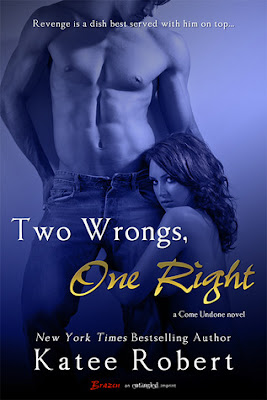 Eight years ago, former Army sergeant Nathan Schultz let the love of his life disappear without a fight. After watching everyone around him find happiness while his slipped further away, he’s finally ready to fight for Chelsea Callaghan—and he’s not afraid to play dirty.

Chelsea has always followed her conservative family’s rules—with one heartbreaking exception. When she receives an invitation to an old high school friend’s wedding, she knows who’s to blame. Though she goes solely to give Nathan a piece of her mind, he blackmails her into staying the entire week. With him.

There’s no way she’ll bow to Nathan’s will without making him pay. Unfortunately, revenge is a dish best served fully clothed, and they can’t be in the same room without losing theirs. As insatiable, anger-fueled lust shifts into something more, they begin to lose sight of why they can’t be together. But with so many unforgivable wrongs between them, can Nathan and Chelsea ever make things right?

REVIEW
Two Wrongs, One Right is a hot and steamy second chance romance.  It’s the third book in the Come Undone Series, but is completely stand alone.
Eight years ago, Nathan Schultz and Chelsea Callaghan broke each other’s hearts.  The secret high school sweethearts thought they had a future together until Nate left to join the Army and Chelsea moved roughly four hours away.  Though Nate learned where Chelsea was a month after he returned from basic training, he refused to “chase after her”.  During the entire eight years, neither has spoken to the other, but strangely were able to keep tabs on the other through the art world.
Finally, Nate decides enough is enough.  His best friend has returned home, met someone, and fell in love.  His brother is getting married to the love of his life.  Everyone around him is happy and Nate is just existing.  He decides he’s ready for a chance with Chelsea now and he will do whatever it takes to get her back.  Nate pulls a romantic move and invites Chelsea to his brother’s weekend wedding.  Chelsea accepts, though she’s not quite sure why and doesn’t really want to be around Nate.  Her weekend mission is clear to her, say her peace and sever all ties with Nate.
Nate blackmails Chelsea into staying the weekend and spending the time with him in his hotel room.  He needs to win her trust back but it’s not going to be easy.  They connect on a physical level and Nate uses it to his advantage.  I wasn’t prepared for the light BDSM Nate pulled in the book.  But I will say the man knows exactly what he’s doing.
Over the course of the weekend, both Nate and Chelsea realize that eight years ago they were too preoccupied with their own pain to realize what the other was going through and how their actions contributed to the hurt feelings.  Because his father took off when he was young, Nate wanted to prove to Chelsea that he could take care of her and that she didn’t have to be held hostage by the life her politically conservative family wanted for her.  For Chelsea, she just wanted to be able to make her own choices instead of someone always making them for her.
Nate and Chelsea had great banter, among other things.  They each tried to get the upper hand not admitting how bad they wanted the other.  I was amazed by the transformation and realizations these two made.  I was also surprised about how touching the story was.  It actually brought tears to my eyes.
Rating: 4