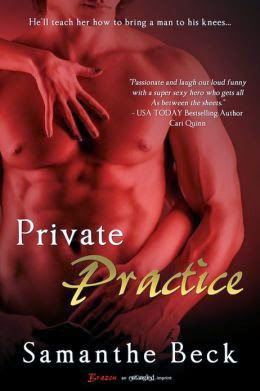 Dr. Ellie Swan has a plan: open her practice in tiny Bluelick, Kentucky, so she can keep an eye on her diabetic father, and make hometown golden-boy Roger Reynolds fall in love with her. But Ellie has a problem. Roger seeks a skilled, sexually adventurous partner, and bookish Ellie doesn’t qualify.

Tyler Longfoot only cares about three things: shaking his bad boy image, qualifying for the loan his company needs to rehab a piece of Bluelick’s history, and convincing Ellie to keep quiet about the “incident” that lands him on her doorstep at two a.m. with a bullet in his behind.


The adorable Dr. Swan drives a mean bargain, though. If sex-on-a-stick Tyler will teach Ellie how to bring a man to his knees, she’ll forget about the bullet. Armed with The Wild Woman’s Guide to Sex and Tyler’s lessons, Ellie is confident she can become what Roger needs…if she doesn’t fall for Tyler first.

Ellie Swan has moved back to her hometown of Bluelick, Kentucky, to open a general practice and to look after her diabetic father.  Not that he wants her to or is grateful or anything.  Tyler Longfoot is an easy going bad boy, who owns his own construction company.  He’s also a good guy in more ways than one.

Who knew taking a bullet to your butt could lead you to the love of your life. Well, that’s what happen to Tyler.  Yep.  Late one night at a bar, Tyler gets shot in his behind for talking to a woman.  Not wanting to get the other guy in trouble, Tyler goes to Ellie’s house in the middle of the night asking her to help him.  But Tyler also asks for something else.  He asks Ellie to not call the police.

By law, Ellie is required to report any shooting to the police.  If she doesn’t, then she risks losing her license.  When Tyler tells her that he will do anything for her not to tell, she sees this as a great opportunity.  You see...Ellie has heard that Roger, the man of her dreams, has broken up with his fiancé because she wasn’t adventurous enough when it came to sex.  Ellie is far from adventurous herself but she figures that since Tyler has a reputation of his own, he can teach her a thing or two to go along with her The Wild Woman’s Guide to Sex book she purchased.  With an agreement to help Ellie out in the bedroom, the two set out to complete chapters 3, 6, 10 and 13.  Or so Ellie thinks.

Private Practice delivers on the funny hilarious moments I’ve come accustomed to while reading Samanthe Beck’s books.  But it also delivers on friendship, love, and understanding.  Ellie and Tyler on the surface are total opposites of each other.  She’s clinical and by the book.  He’s easy going and doesn’t have a problem going outside of the box to get something done.  More importantly, they are both fiercely protective of each other and seeing the good in the other, even when they don’t see it in themselves.

Unlike most Brazen books I’ve read, you have to get pretty far into this one to get to the sweaty parts.  But the wait time is definitely worth it.  I’m looking forward to seeing what’s in store for the next book in this series.  It promises to be really hot with Ellie’s office manager Melody and Fire Chief Bradley.

Purchase Private Practice from from Amazon and other eRetailers