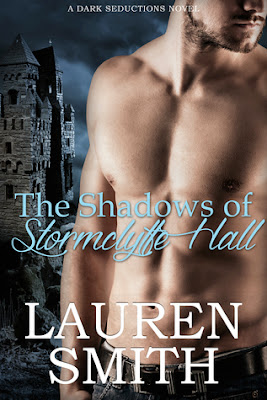 
To defeat a dark evil, they must face his family’s past…

Bastian Carlisle, the Earl of Weymouth, doesn’t believe in ghosts. Even though tragedy and mysterious hauntings have driven his family away from his ancestral home, Stormclyffe Hall, he is determined to restore the castle to its former glory. His plans are disrupted when a stubborn American shows up on his doorstep hoping to pry into his family’s tragic history.

Jane Seyton, an American graduate student, is convinced there’s more to the tragedy of Stormclyffe Hall than history claims. Ever the scholar, she is determined to discover the truth, even if it means putting up with the arrogant, yet sexy, Bastian.

Although Bastian wants nothing to do with the pushy American, it soon becomes clear that something evil is in the house—and that something is targeting both Jane and Bastian. The two must join forces to purge the ghosts of Stormclyffe Hall once and for all—even as they try to fight a physical attraction between them that grows more and more impossible to deny.

REVIEW
I was drawn to The Shadows of Stormclyffe Hall from the moment I read the synopsis.  The mystery, the history, the ghostly happenings, the noble gent and the scholar - it appealed on so many levels and not for one second did it disappoint.

"Evil rules the castle.  Stalks the halls and torments those who dare to live inside."

When Jane Seyton arrives at Stormclyffe desperate to discover its secrets, Sebastian Carlisle, ninth Earl of Weymouth is far from impressed; the last thing he needs is a nosy American woman prying into his family history when he is trying to restore his home to it's former glory.  The Carlisle name may have been plagued by tragedy, however he doesn't believe it to be anything more sinister than devastating bad luck.  But Jane unleashes something from deep within the castle walls and in Bastian, and it soon becomes apparent that there is more to the bloody history of his home than he could have imagined. The past and the present collide.

"...the place was shrouded in tragedy and its stones soaked with innocent blood."

This book is like nothing I've ever read.  Lauren Smith has written an enthralling modern paranormal romance with a historical atmosphere and twist.  Her words captivate, transporting you to idyllic Southwest England and to a castle which is as eerie and haunting as it is bewitching and beautiful. Every image and scene set is so visually descriptive that the reader will live and breathe Jane and Bastian's journey.  They have a chemistry which is magnetic, and both were characters I adored.

"I've had the most wicked thoughts about you. I'm betting a few of them are illegal in some countries."

The romance seduced me, the paranormal spooked me and with flashbacks to the 1800's detailing the story of Bastian's ancestor Richard and his love Isabelle, the history and happenings of Stormclyffe Hall bewitched me.  It's an extraordinary start to the Dark Seductions series and I can't wait to see where Lauren takes it next.

Purchase The Shadows of Stormclyffe from:
Amazon | Entangled | Goodreads